Doctors Without Borders: Ebola ‘out of control’ 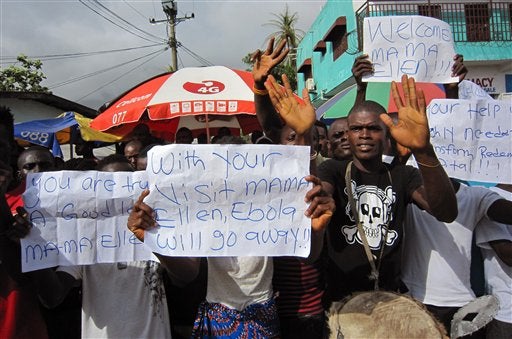 In this file photo taken on Tuesday, June 17, 2014, people protest outside a hospital as Liberia President Ellen Johnson Sirleaf visit’s the area after Ebola death’s in Monrovia, Liberia. A senior official for Doctors Without Borders says the Ebola outbreak ravaging West Africa is “totally out of control” and that the medical group is stretched to the limit in its capacity to respond. AP

DAKAR, Senegal — The Ebola outbreak ravaging West Africa is “totally out of control,” according to a senior official for Doctors Without Borders, who says the medical group is stretched to the limit in responding.

The outbreak has caused more deaths than any other of the disease, said another official with the medical charity. Ebola has been linked to more than 330 deaths in Guinea, Sierra Leone and Liberia, according to the World Health Organization.

International organizations and the governments involved need to send in more health experts and increase public education messages about how to stop the spread of the disease, Bart Janssens, the director of operations for the medical group in Brussels, told The Associated Press on Friday.

“The reality is clear that the epidemic is now in a second wave,” Janssens said. “And, for me, it is totally out of control.”

The Ebola virus, which causes internal bleeding and organ failure, spreads through direct contact with infected people. There is no cure or vaccine, so containing an outbreak focuses on supportive care for the ill and isolating them to limit the spread of the virus.

The current outbreak, which began in Guinea either late last year or early this year, had appeared to slow before picking up pace again in recent weeks, including spreading to the Liberian capital for the first time.

“This is the highest outbreak on record and has the highest number of deaths, so this is unprecedented so far,” said Armand Sprecher, a public health specialist with Doctors Without Borders.

According to the WHO, the highest previous death toll was in the first recorded Ebola outbreak in Congo in 1976, when 280 deaths were reported. Because Ebola often touches remote areas and the first cases sometimes go unrecognized, it is likely that there are deaths that go uncounted during outbreaks.

The multiple locations of the current outbreak and its movement across borders make it one of the “most challenging Ebola outbreaks ever,” Fadela Chaib, a spokeswoman for the World Health Organization, said earlier in the week.

But Janssens’ description of the Ebola outbreak was even more alarming, and he warned that the countries involved had not recognized the gravity of the situation. He criticized WHO for not doing enough to prod local leaders; the U.N. health agency did not immediately respond to requests for comment.

“There needs to be a real political commitment that this is a very big emergency,” he said. “Otherwise, it will continue to spread, and for sure it will spread to more countries.”

But Tolbert Nyenswah, Liberia’s deputy minister of health, said the highest levels of government are working to contain the outbreak, noting that Liberia had a long period with no new cases before this second wave.

Governments and international agencies are definitely struggling to keep up with the outbreak, said Unni Krishnan of Plan International, which is providing equipment to the three countries. But he noted that the disease is striking in one of the world’s poorest regions, where public health systems are already fragile.

With more than 40 international staff currently on the ground and four treatment centers, Doctors Without Borders has reached its limit to respond, Janssens said. It is unclear, for instance, if the group will be able to set up a treatment center in Liberia, like the ones it is running in in Guinea and Sierra Leone, he said.

Janssens said the only way to stop the disease’s spread is to persuade people to come forward when symptoms occur and to avoid touching the sick and dead.

He said this outbreak is particularly challenging because it began in an area where people are very mobile and has spread to even more densely populated areas, like the capitals of Guinea and Liberia. The disease typically strikes sparsely populated areas in central or eastern Africa, where it spreads less easily, he said.

By contrast, the epicenter of this outbreak is near a major regional transport hub, the Guinean city of Gueckedou.

WHO, DOH see no need for travel ban due to ebola