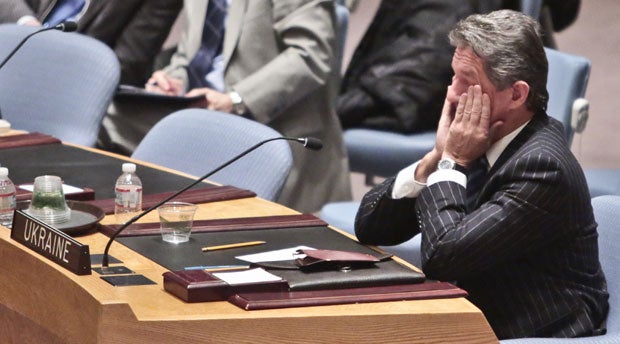 UNITED NATIONS—An emergency UN Security Council meeting on Ukraine, called by Russia to set out in greater detail its policy after being threatened by US and EU sanctions, was told Monday by Russia’s UN ambassador that Ukraine’s fugitive president had requested Russian soldiers in the strategic Crimea region “to establish legitimacy, peace, law and order.”

The emergency meeting was the third in four days on Ukraine, where the Ukraine government claimed that Russian troops were still pouring into Crimea, in violation of international accords.

Earlier on Saturday, a meeting of the envoys from the council’s 15 member states ended in disagreement between the West and Russia, with Washington and London urging Moscow to pull back its military reinforcements from the strategic Black Sea peninsula with a majority ethnic Russian population.

Saturday’s open meeting began with a two-hour standoff over procedure as Moscow fought the presence of cameras and of Ukraine.

According to a diplomat on the council, Russia “was taken aback Saturday and wants to give its read on events, especially as things go south on the ground.”

The third emergency Security Council meeting in four days came amid fears that the Kremlin might carry out more land grabs in pro-Russian eastern Ukraine. Russia faced demands from almost all council members to pull its troops out of Crimea and got no support for its military action from close ally China.

Action by the UN’s most powerful body appears unlikely. Russia has veto power as a permanent member and can block the council from adopting any resolution criticizing or sanctioning Moscow.

During the heated meeting, Russian Ambassador Vitaly Churkin strongly defended his government’s actions as “fully appropriate and legitimate” to defend the human rights of the Russian-speaking minority in Ukraine, which he claimed is under threat of oppression from the north and west after violent protests swept in a new government.

He told the council he was authorized to read a statement from fugitive President Viktor Yanukovych—and show council members a copy—requesting Russian President Vladimir Putin to use his armed forces to restore peace and defend the people of Ukraine.

Yanukovych fled the former Soviet republic to Russia after his ouster and had said Friday that he would not ask for Russian forces.

Churkin quoted Yanukovych as saying “Ukraine is on the brink of civil war,” people particularly in the Russian-speaking Crimea are being persecuted for language and political reasons and “there are open acts of terror and violence” under the influence of Western countries.

French Ambassador Gerard Araud said the letter was just a piece of paper handed to Yanukovych which “got his signature.” Asked if the letter was phony, Araud replied, “It’s not a false letter, it’s a false president.”

US Ambassador Samantha Power dismissed Moscow’s contention that it intervened militarily in Crimea to protect the human rights of Russian civilians there as “baseless,” insisting there is no evidence of any threats against ethnic Russians in Ukraine.

“One might think that Moscow has just become the rapid response arm of the High Commissioner for Human Rights,” she told the council. “Russian military action is not a human rights protection mission.”

The letter described what could be the first reported casualty of the crisis. Sergeyev claimed that Russian forces trying to capture the armory of the Ukrainian Air Tactical brigade near Sevastopol used stun grenades against Ukrainian soldiers Sunday, leaving an officer with a brain injury and in shock.

The letter also said Russian aircraft illegally entered Ukrainian airspace twice Monday night. It said all main roads in Crimea are blocked, military bases and Ukrainian ships in Sevastopol Bay are surrounded and an attempt has been made to capture the Ukrainian Navy Headquarters.

Power said the Organization for Security and Cooperation in Europe—which includes Russia, the US and all European countries—is deploying monitors to Ukraine on Monday night. She urged Russia to allow the monitors to go to Crimea, an appeal echoed by Britain, France and many other council members.

Churkin didn’t rule out having OSCE monitors in Crimea but said it must be considered by the government there.

The Russian ambassador claimed the recent protests were hijacked by extremists and gangs of “ultranationalists.”

Churkin said Ukraine should return to an agreement signed Feb. 21 by Yanukovych—but not Moscow—to hold early elections and surrender some powers. Yanukovych fled after sealing the pact with the opposition and foreign ministers of France, Germany and Poland.