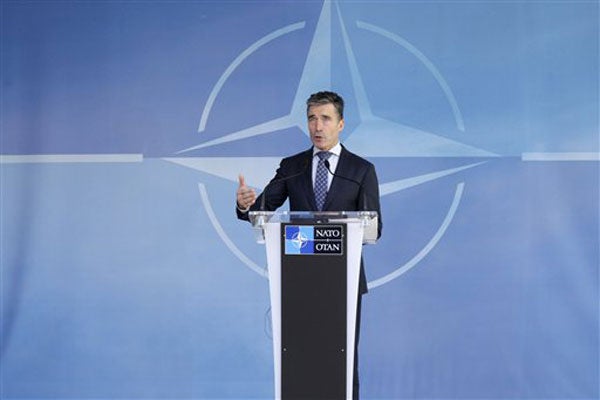 “We will have more planes in the air, mores ships on the water and more readiness on the land,” Fogh Rasmussen told reporters in Brussels, declining to give exact troop figures.

Moscow must make clear “it doesn’t support the violent actions of well-armed militias or pro-Russian separatists” in eastern Ukraine, he added.

He said the NATO deployments are about “deterrence and de-escalation” in the face of Russia’s aggressive behavior.

The NATO chief did not mention naval deployments to the Black Sea — which Russia would likely see as a direct aggression even though NATO members Bulgaria, Romania and Turkey also border the sea. He insisted, however, that “more will follow if needed.”

NATO estimates Russia has amassed some 40,000 troops on Ukraine’s eastern border and could invade parts of the country within days if it wished. Fogh Rasmussen urged Russia to pull those troops back.

The 28-nation alliance has already suspended most cooperation and talks with Russia. The United States has dispatched fighter planes to Poland and the Baltics, enabling NATO to reinforce air patrols on its eastern border. NATO also performs daily AWACs surveillance flights over Poland and Romania.

US troops may be sent to Eastern Europe