US weighs airstrikes and humanitarian aid in Iraq 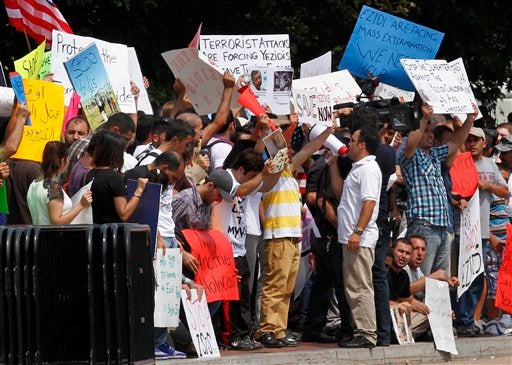 Protesters ask for help for Yazidi people who are stranded by violence in northern Iraq, Thursday, Aug. 7, 2014, across from the White House in Washington. AP

WASHINGTON — The White House is considering dropping humanitarian supplies by air to thousands of displaced religious minorities in northwestern Iraq who are under siege from Islamic militants, possibly in combination with U.S. airstrikes, according to U.S. defense officials and others familiar with the administration’s thinking.

The administration is also weighing military options, to include airstrikes, in the event that American interests are threatened by the Islamic State group, whose fighters who have made gains toward the Kurdish capital city of Irbil, two senior defense officials said.

The U.S. has a diplomatic consulate in Irbil as well as a military operations center that was set up there recently to advise and assist the Iraqi military in that region.

President Barack Obama met with his national security team Thursday morning to discuss the crisis as the Islamic State group made further gains. Airstrikes in particular would mark a significant shift in the U.S. strategy in Iraq, where the military fully withdrew in late 2011 after nearly a decade of war.

Officials said Obama could announce a decision as early as Thursday. The people familiar with the administration’s thinking insisted on anonymity because they were not authorized to discuss the matter by name.

In recent days, the Islamic State militants have swept through villages in the north that are home to religious minorities including Christians and the Yazidis, who follow an ancient religion with ties to Zoroastrianism. Furthering their gains, the extremists seized Iraq’s largest dam Thursday, placing them in control of enormous power and water resources and access to the river that runs through the heart of Baghdad.

While the White House did not publicly outline the range of options under consideration, officials said the U.S. strongly condemns the extremists’ assault on minorities.

“The situation is nearing a humanitarian catastrophe,” White House spokesman Josh Earnest said. “We are gravely concerned for their health and safety.”

Earnest singled out the plight of the Yazidis. Thousands fled their homes after the Islamic State group issued an ultimatum to convert to Islam, pay a religious fine, flee their homes or face death. Many of the Yazidis now are trapped on a mountain without food or water.

Obama used the threat of an imminent humanitarian crisis as a rationale for limited U.S. military action in Libya in 2010, as forces loyal to Moammar Gadhafi threatened a massacre in Benghazi. The U.S. and NATO partners launched a bombing campaign over Libya, with Obama moving forward without congressional approval.

If the president were to approve imminent airstrikes in Iraq, it’s all but certain that he would proceed without formal congressional approval. Lawmakers left town last week for a five-week recess, and there was no sign Thursday that Congress was being called back.

Some Republicans have expressly called for the president to take action and said he doesn’t need the approval of lawmakers.

If Obama were to approve humanitarian assistance to the Yazidis and others, it could be delivered via air drops by the U.S. military. Airstrikes could be used to provide cover allowing the air drops to be made safely.

The military could also advise and assist the Iraqi air force on where and how to deliver humanitarian relief supplies.

Iraq has been under siege for months by the al-Qaida-breakaway group seeking to create an Islamic state in territory it controls in Iraq and Syria and imposing its harsh interpretation of Islamic law. Iraqi government forces, Kurds and allied Sunni tribal militiamen have been struggling to dislodge the Islamic State militants and its Sunni allies with little apparent success

The Iraqi government has sought military assistance from the U.S., but Obama has resisted. He has cast any military action as contingent on Iraq reforming its political system to be more inclusive, a step the U.S. hopes would lessen the country’s sectarian tension.

However, Obama has warned that even if the U.S. were to re-engage militarily in Iraq, it would be in a limited fashion and would not involve putting U.S. combat troops on the ground. His spokesman reiterated those assurances again on Thursday.

“There are no American military solutions to the problems in Iraq,” Earnest said.

Obama did dispatch more than 800 U.S. forces to Iraq this year following the Islamic State’s gains. More than half are providing security for the embassy and U.S. personnel. American service members also are involved in improving U.S. intelligence, providing security cooperation and conducting assessments of Iraqi capabilities.