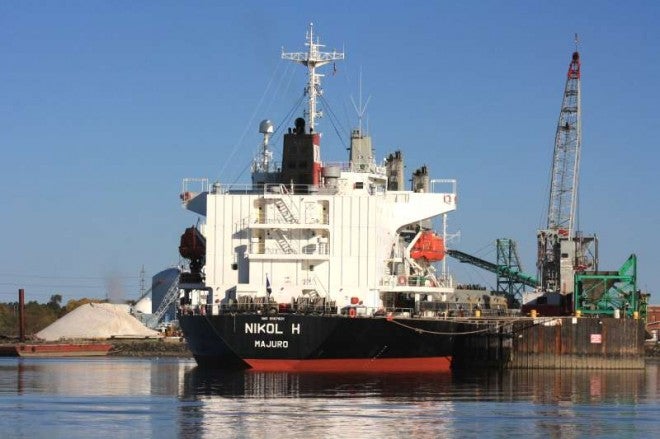 • But crew getting food, pay

PHILADELPHIA, Pennsylvania — A Greek-owned cargo ship with an Egyptian captain, one Ukrainian and 18 Filipino seamen has been stranded in the Delaware River for nearly three months because its owner has not paid bills since April and the U.S. Coast Guard is demanding operational repairs.

The Nikol H, registered in the Marshall Islands, needs additional repairs before sailing, and the owners, Derna Shipping, allegedly owe as much as $1.2 million. Vendors and others have sued to recover costs for providing fuel, food and supplies while the ship has been here, reported the Philadelphia Inquirer July 30.

The original crew members’ visas expired and they are not permitted to go ashore. However, several original crew, whose contracts expired, received U.S. Customs “paroles” to go home. Even those with visas can’t get off the ship because the ship is in the middle of the river and there’s no easy access to transportation.

The Seamen’s Church Institute, which regularly greets seafarers whose ships dock in ports along the Delaware, has provided the sailors with cell phones to call home, Internet service and chaplain visits, according to the Inquirer.

The crew members are getting paid and receive provisions from the ship agent, G.M. Richards Enterprises. The ship generators work and there is air-conditioning.

“Morale is OK,” said Capt. Ali Affar told the Inquirer. “We don’t have any problems. We receive also fresh water supply. Hopefully, the crew will feel better after the ship berths and they have a chance to visit ashore.”

“If you can imagine,” said the Rev. Peter Stube, Seamen’s Church executive director, “being on a small boat for three or four months without being able to get off, and land within sight. We have made a point of making sure they can stay in touch with the families.”

The saga began April 11 when the Nikol H, owned by an operating company in Piraeus, Greece, discharged 13,521 tons of cocoa beans at Pier 84 in South Philadelphia.

The Coast Guard, which inspects arriving ships, cited the Nikol for operational deficiencies and ordered the vessel not to sail until repairs were made. The ship remained at the pier for more than a month, until it was cleared by the Coast Guard.

On May 23, Dependable Distribution Services, the operator at Pier 84, sued in federal court, seeking to “arrest” or stop the ship from leaving for failure to pay nearly $300,000 in wharfage, stevedoring and other fees for the six weeks it had been docked for repairs.

Other suppliers, the ship agent, and a time-charter firm joined the lawsuit, saying they also were owed money.

Two weeks ago, the Coast Guard returned to the ship and found engine and other problems, which it wanted corrected.

The owner, Derna Carriers S.A., claims not to have the money to pay, Philadelphia maritime lawyer Alfred Kuffler told the judge. “The only one with money is the bank.”

Bremer Landesbank in Germany holds the mortgage on the Nikol, and the owners are in default, according to court papers.

Philadelphia maritime lawyer Mary Elisa Reeves said in court that her client, the bank, was willing to pay for “necessities,” but disputed the fee by Dependable Services and the claim by the time-charter company. Reeves asked the judge to sever, or separate, the “necessities” claims from the others.

While the drama plays out, the Nikol and its crew sit in the Delaware, south of the U.S. Coast Guard station at Washington Avenue and Columbus Boulevard.

The lawsuit demands, as a last resort, that the ship be auctioned.

Tied up in court

Meanwhile, the ship’s fate is tied up in court, under U.S. District Judge Luis Felipe Restrepo.

Everybody is “on pins and needles, waiting for something to happen,” Rex said. “The Coast Guard can’t allow the ship to sit indefinitely in the middle of the river without the engine repairs.”

Recently, there has been an attempt to sell the ship and pay the vendors, but so far, that hasn’t happened, Rex said. “If no buyer comes soon, once the ship goes to berth for repairs, it likely may be auctioned.”

The financial plight of the Nikol H “is another chapter of what’s happening in the shipping industry,” Kuffler, the maritime lawyer, said outside court.

Before 2008, the world economy was booming. The price of ships and the cost to lease or charter ships was at an all-time high. “Come 2008, that all changed pretty suddenly,” Kuffler said. “The shipping markets are still seeing the consequences. This little ship is the next chapter.”

Read Next
US weighs airstrikes and humanitarian aid in Iraq
EDITORS' PICK
WHO says not to use ivermectin on COVID-19 patients
Harry Roque in hospital for COVID-19 treatment
Pru Life UK receives four golden arrows for solid corporate governance
PH’s COVID-19 active cases reach over 190k after 12k new infections reported
Pre-order the new vivo Y20s [G] to get a free TWS earphone
Speed up your game with the new vivo Y20s [G]
MOST READ
Stop ‘creeping occupation’ of ‘militia’ boats in WPS, Pacquiao asks China
Bea Alonzo clarifies status of her relationship with Dominic Roque
Convicted former aide of Sen. Bong Revilla dies — BuCor
Locsin to China: ‘Then move out’
Don't miss out on the latest news and information.