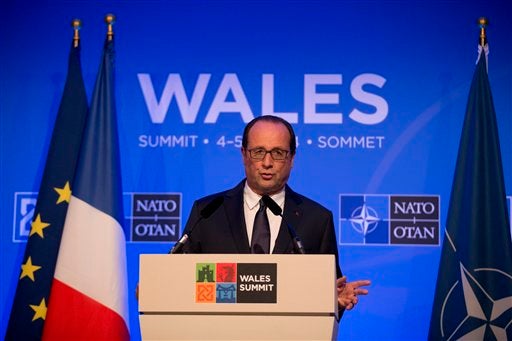 French President Francois Hollande speaks during a press conference at the end of the NATO summit at the Celtic Manor Resort in Newport, Wales, Friday, Sept. 5, 2014. AP

NEWPORT, Wales — France’s Socialist President Francois Hollande is defending himself against accusations by his ex-first lady that he despises the poor.

A visibly indignant Hollande insisted Friday on his commitment to “the weakest, the most humble, the poorest.” He called it his “raison d’etre,” or reason for being.

“I will never accept … that the commitment of a lifetime may be put into question,” Hollande told reporters at a NATO summit in Newport, Wales.

According to a book by former partner Valerie Trierweiler released this week, Hollande once dismissed the poor as people with “no teeth” — a reference to those who cannot afford dental care. Hollande’s many critics have seized on the term.

Hollande and Trierweiler broke up in January amid reports Hollande was having an affair with a French actress.