Miscommunication blamed for deadly US mistake 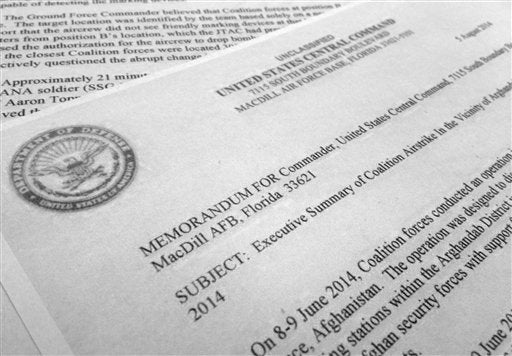 The first page of the report released by US Central Command Thursday, Sept. 4, 2014, on the friendly fire incident in Afghanistan in June is photographed in Washington on Sept. 4, 2014. Avoidable miscommunication between US air and ground forces led to a incident that killed five US soldiers and one Afghan. AP

WASHINGTON— Avoidable miscommunication between US air and ground forces led to a “friendly fire” incident in Afghanistan that killed five US soldiers and one Afghan in June, according to a military investigation report.

The incident was one of the deadliest friendly fire episodes of the war, which began 13 years ago next month.

As a further reminder that the war is still deadly, even as US forces prepare to end their combat mission in December, the Pentagon on Friday said Army Spc. Brian K. Arsenault, 28, died Thursday of wounds sustained when his unit was attacked by enemy forces in Ghazni, Afghanistan.

The report released Thursday by US Central Command, which oversees operations in Afghanistan, cited a collective failure by soldiers, commanders and air crew members to execute the fundamentals of the mission. As a result, the five Americans and one Afghan were mistaken for the enemy and were attacked with two laser-guided bombs from a B-1 bomber.

The deaths were an example of how battlefield mistakes caused by confusion or miscalculations can have profound consequences. Friendly fire is a problem as old as warfare, and although technological advances, training and combat experience have lessened the frequency, it still poses a threat to U.S. and allied forces.

A two-star Air Force general led the investigation. Many details of the report were blacked out before its public release.

The B-1 bomber crew was executing an authorized order, but the crew members were faulted by investigators for not taking reasonable precautions to ensure they knew where friendly forces were located. Despite discrepancies in reported US troop locations — suggesting that something may have been amiss — the air crew did not take necessary steps to validate its information before launching the bombs, the report said.

Unidentified members of the ground forces, which included an Army Special Forces unit, were faulted for incorrectly communicating some troops’ positions and for not knowing that the B-1 bomber’s targeting gear is incapable of detecting friendly marking devices of the type used by U.S. ground forces in the June 9 operation. These failures led to the mistaken conclusion that the targeted U.S. and Afghan soldiers were insurgents.

In response to the report, the Army said it is considering whether any tactics should be changed to minimize chances of repeating mistakes that led to the deaths. It also forwarded the report to the commander of Army Special Operations Command to decide whether any punitive action should be taken. Two of the soldiers who died were members of the 4th Special Forces Group; the three other Americans were from conventional units and were working with the Special Forces on the ill-fated mission.

The Air Force said it would study the report before deciding on any disciplinary action.

The June incident happened in Zabul province in southern Afghanistan at the end of an operation led by the Afghan army and supported by Army Special Forces. Their aim was to disrupt insurgents and improve security for local polling stations in the Arghandab district in advance of the June 14 Afghan presidential runoff election.

From an altitude of about 12,000 feet (3,650 meters), the B-1 bomber was providing what the military calls close air support while US and Afghan ground troops were moving out of the area at the conclusion of their operation.

The six soldiers who were killed had moved from their group’s main position in a valley to higher ground on a ridgeline in order to maneuver on insurgent forces. Muzzle flashes seen at their position on the ridgeline were mistaken for signs of rifle fire from insurgents, in part because the movement of the six was not properly communicated to those coordinating with the B-1 crew. And when the B-1 crew said their targeting pods had detected no US marking devices at that location it was decided that targets must by insurgents.