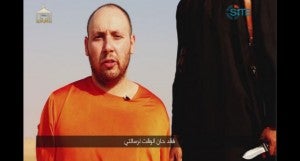 This image made from video posted on the Internet by Islamic State militants and provided by the SITE Intelligence Group, a U.S. terrorism watchdog, on Tuesday, Sept. 2, 2014, purports to show journalist Steven Sotloff before he was beheaded. AP

MIAMI—The family of murdered US journalist Steven Sotloff have paid a moving tribute to “his gentle soul”, as a friend challenged his jihadist killers to debate the teachings of Islam.

Barak Barfi, speaking Wednesday for the Sotloff family in their first comment since his beheading was shown on a video released by the radical group Islamic State, remembered him as a thoughtful man who enjoyed simple pleasures and was fascinated by the Middle East.

The Middle East scholar switched to Arabic at the end of his statement and in forceful language addressed himself directly to IS leader Abu Bakr al-Baghdadi.

“I also have a message to Abu Bakr. Woe to you! You said Ramadan is a month of mercy. Where is your mercy?”, Barfi said.

“I am ready to debate with you. Abu Bakr, I come with kind preachings, I have no sword in my hand and I am ready for your response.”

More angry language came Wednesday from US Vice President Joe Biden, who said the United States would be relentless in its fight against IS after its beheading of Sotloff and fellow American journalist James Foley.

Sotloff’s horrific killing was shown in a video which emerged on Tuesday, just days after Foley was murdered by Islamic State militants in near-identical circumstances.

The 31-year-old had been drawn to reporting from the world’s conflict zones because he was unable to “turn his back on the suffering pervading the world,” Barfi said.

Sotloff’s father briefly appeared holding a photo of his son, declining to speak to media.

Barfi said the reporter was attracted to Syria through a fascination with the Arab world.

“He was no war junkie, he did not want to be a modern-day Lawrence of Arabia: he merely wanted to give voice to those who had none,” Barfi said.

“From the Libyan doctor who struggled with psychological services to children ravaged by war to the Syrian plumber who risked his life by crossing regime lines to purchase medicine, their story was Steve’s story.

“He ultimately sacrificed his life to bring their story to the world,” added Barfi, insisting that Sotloff was “no hero.”

“Like all of us, he was a mere man who tried to find good concealed in a world of darkness and if it did not exist he tried to create it.”

Sotloff, well-versed in the history and culture of the Middle East, was taken captive in Syria last year.

The self-styled “stand-up philosopher from Miami,” who wrote for Time, the Christian Science Monitor, Foreign Policy and World Affairs Journal, had always found time for family despite his workload.

“He had a fondness for junk food he could not overcome and despite his busy schedule, he always found time to Skype his father to talk about his latest golf game,” Barfi said.

“He was appreciated by all who met his sincerity and kindness. Steve had a gentle soul that this world will be without, but his spirit will endure in our hearts.

“This week, we mourn, but we will emerge from this ordeal. Our village is strong. We will not allow our enemies to hold us hostage with the sole weapons they possess: fear.”