KITTERY, Maine — Vice President Joe Biden on Wednesday said America will follow the terrorists who posted videos showing the beheading of two journalists “to the gates of hell.”

“The American people are so much stronger, so much more resolved than any enemy can fully understand,” Biden said at the Portsmouth Naval Shipyard in Maine. “As a nation, we’re united. 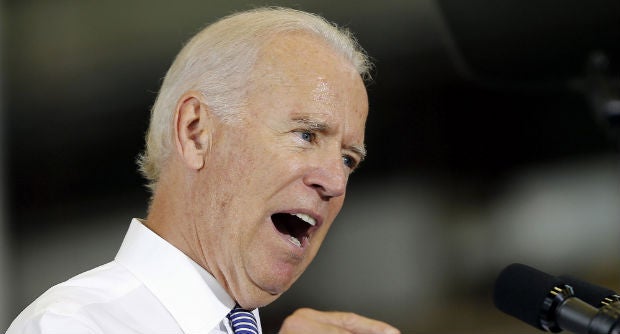 Vice President Joe Biden speaks about the killing of Steven Sotloff while visiting the Portsmouth Naval Shipyard in Kittery, Maine, Wednesday, Sept. 3, 2014. Biden said America will follow the terrorists who posted videos showing the beheading of two journalists “to the gates of hell.” AP

And when people harm Americans, we don’t retreat, we don’t forget.”

“We take care of those who are grieving and when that’s finished, they should know we will follow them to the gates of hell until they are brought to justice,” Biden said. “Because hell is where they’ll reside.”

Biden, a potential 2016 Democratic candidate for president, has used “gates of hell” before, invoking it in an October 2012 vice presidential debate when talking about the killing of Osama bin Laden.

Foley was from New Hampshire and Sotloff attended school there, bringing their killings close to home for many in attendance at Biden’s speech. The shipyard employs many New Hampshire residents.