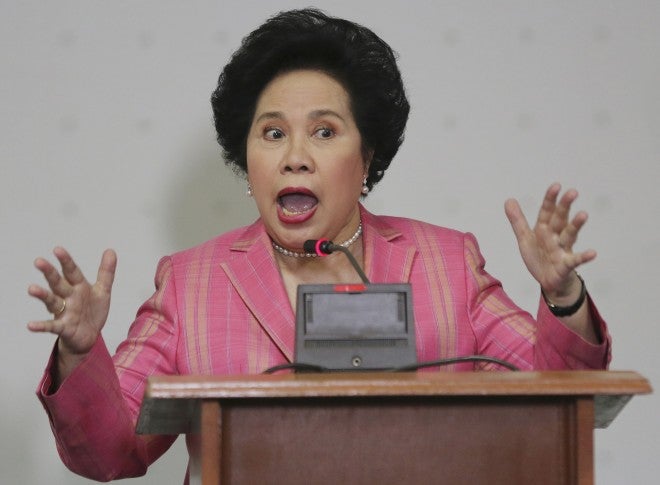 Senator Miriam Defensor-Santiago AP PHOTO”By 2016 I will be disqualified by law to seek another term as senator,” she said.

MANILA, Philippines –  Just barely  two months before announcing  she had  Stage 4 lung cancer,  Senator Miriam Defensor-Santiago  said she  has now overcome  it and  is now considering running for president in 2016.

“I have licked cancer, and I’m actually thinking of several career options.  By 2016, I will be disqualified by law to seek another term as senator,” Santiago said in a statement on Wednesday.

Last July 2, the senator called a press conference to announce that she was suffering from Stage 4 lung cancer.

After her oncologists issued a diagnosis on lung cancer,  Santiago said  she was placed on medication called Tarceva (aka Erlotinib) for six weeks, at only one table a day.

Last August 12, she said, St. Luke’s Medical Center in Bonifacio Global City issued a report on a PET/CT Scan stating that the tumor in her “left lung has regressed,” meaning that it has become smaller.

“The latest lab test shows that the cancer cells are waving a white flag.  During this time, I only have to work on my stamina . During the six-week period of treatment, I was even able to work on the 2014 editions of some 10 law books which are scheduled for release by the end of the year,” she said.

“I’m not going to be coy.  Society leaders have urged me to seek the presidency.  I can rise to the occasion, although I was following the other sign posts on the road to recovery,” said the senator.

Santiago said she would  run for president in 2016  if there are enough like-minded people such as Fr. Joaquin Bernas who will support her.

The senator was reacting to  Bernas’ remarks  that  President Aquino should no longer seek a second term and to “give  Miriam naman a chance.”

While she has always ran for public office under her own People’s Reform Party, this time,  Santiago said she  would need to coalesce with one or both among the Liberal Party headed by Transportation Secretary  Joseph Emilio Abaya, and the Nacionalista  Party led by former Senator Manny Villar.

“After I was diagnosed with cancer, Sen. Manny went to my house and told me, among other things, that my popularity level is very high.  But he also said that he is encouraging several hopefuls to raise their survey ratings,” Santiago said.

Quoting from a poem that she recited during the funeral ceremonies for her son who died at 23 years old, Santiago said:  “Do not stand at my grave and weep; I am not there.  I do not sleep.”

Miriam Santiago: ‘I got lung cancer‘

Cancer-stricken Santiago takes leave to seek treatment in US

Read Next
MRT operations back to normal
EDITORS' PICK
Smart three-peats as country’s fastest mobile network – Ookla
Would the military allow me to stay this long if I’m inutile? – Duterte
In good spirits: SMDC helps farmers and residents through Kadiwa Market
Pre-order the new vivo Y20s [G] to get a free TWS earphone
65% of Filipinos say Duterte’s health should be made public – SWS
DSWD chief admits ‘slow start’ in distribution of aid in ‘NCR Plus’
MOST READ
Vico Sotto frets getting photos of ‘butt vaccination’ from Pasig dwellers
Metro Manila to have shortened curfew hours from 8 p.m. to 5 a.m. under MECQ
San Miguel Corp. continues to invest heavily in the Philippines’ future
COVID-hit Roque slams ‘un-Christian’ query on how fast he secured hospital bed
Don't miss out on the latest news and information.