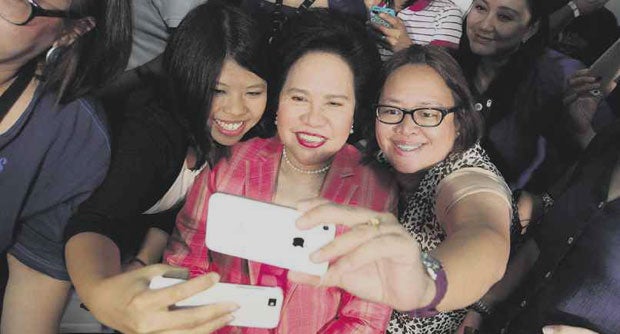 IS THIS ANY WAY TO LOOK LIKE A CANCER PATIENT? A glowing Sen. Miriam Defensor-Santiago takes selfies with two reporters after a press conference where she announced that she has been diagnosed with Stage 4 lung cancer. But not to worry, she has a “magical” tablet. JOSEPH VIDAL/PRIB

MANILA, Philippines–When Sen. Miriam Defensor-Santiago broke the news to her mother that she had cancer, the 91-year-old said, “Well, everyone has to go sometime.”

“I don’t know what the reaction of my enemies [will be]. Maybe they’ll be happy. On the one hand I might die, and then they could get rid of me. But on the other hand, I might survive and then I will get rid of them,” she told a news conference that she called Wednesday to disclose her condition.

In good humor, Santiago announced that she had Stage 4 lung cancer but with a “magical” tablet, she expected to be “fully cured” in six weeks.

Santiago’s announcement surprised reporters, as they had expected her to announce a bid for Malacañang in 2016.

After disclosing her cancer, Santiago dished out the good news: She has a rare condition called “genetic mutancy,” which makes the cells in her left lung “impermeable” to cancer.

Because of this, she said, she doesn’t need to undergo chemotherapy and suffer from its side effects.

She only needs to take a chemotherapy tablet every day, she said. And only when the cancerous mass doesn’t shrink will she undergo medical treatment abroad, she said.

“So I hope to be able to see you in six weeks, fully cured of cancer. And you’re probably feeling even envious of my status because it will give me a certain gravitas when I talk to other people about cancer,” she said, chuckling.

In the briefing, Santiago introduced herself as the only senator “who has been diagnosed with lung cancer as of last week.” She said it made breathing more difficult for her.

“I have come … so you could see me personally before the cancer takes its ravages on my physical body. I have come to shake your hand personally, to kiss you personally because I missed you for two years ….,” she told reporters.

“However, if I’m not able to do that today, I’ll kiss you anyway when I’m dead,” she added, drawing laughter.

Santiago said she received the diagnosis by physicians of Makati Medical Center with “excitement.”

“I’m very excited. I’m not kidding. I said, ‘Yes, I’ve got cancer.’ Because now, I’m entering another dimension of my human life. That has always been my attitude,” she said.

What could have caused the cancer?

Santiago replied with a joke: “Giving troubles to my colleagues is one definite cause of cancer.”

Turning serious, she said the doctors had no clue as to the cause of her cancer, as in her chronic fatigue syndrome. Still, it felt “strange” because neither she nor her husband, Narciso “Jun” Santiago, smoked.

And to her great relief, she said, doctors discovered that she was capable of genetic mutation, “perhaps from living a healthy life,” after doing a biopsy on a lung tissue.

“They discovered that I had a rare condition, which is behavioral mutancy. By themselves, my cells in the left lung have developed a genetic mutation that makes them impermeable to cancer. Which gives them energy to fight off cancer nearby. This, as I said, calls for behavioral therapy,” she said.

Because of this, she only needs to take a tablet, called “molecular targeting” and she grows “prettier every day.”

“This tablet is a sort of magic tablet, so that I don’t have to take anything. Just take the tablet and in effect, it will give me the benefits of chemotherapy, without the side effects,” Santiago said.

The tablet would cure the cancerous cells, which are not “metastatic” or spreading, she added.

Her doctors include former Health Secretary Esperanza Cabral, who is a cardiologist, and pulmonologist Ruth Divinagracia.

She said her sister, Dr. Linnea Evangelista, was in touch with the world’s No. 1 lung cancer specialist, based at Cedars-Sinai Hospital in Los Angeles, California.

“After six months, they’re expecting that the mass will simply degenerate, meaning it will shrink by itself, and then it will no longer be there. If it doesn’t do that, it means things have gotten worse. I have to go to Cedars-Sinai. For me it’s a source of great grief because it’s a very expensive hospital,” she said.

But the cancer has no effect on her work, she said.

“It doesn’t affect cancer patients. There are some people who can get along with this medical tablet. They assured me I can go to work,” she said.

Earlier, Santiago stepped down as judge on the International Criminal Court, citing her chronic fatigue syndrome.

In May this year, she wrote Senate President Franklin Drilon requesting an extension of her “qualified” medical leave.

Santiago has also threatened to run for President in 2016.

“That’s why once I get well next month—I’m supposed to be in remission by next month—I’m going to announce my presidential candidacy,” she said, before letting out a laugh.

Santiago, who lost the 1992 presidential election to Fidel V. Ramos, set conditions for a decision to run for Malacañang.

“Well, if they don’t clean up this mess (Disbursement Acceleration Program)—because as a lawyer I look at the DAP opinion—which goes my way—as a big mess. How are you going to tie up all of these loose ends?” she said.

Prayers from Palace
But then again, she said: “Maybe God will send me another disease, so I don’t know what to do.”

Malacañang said it was praying for Santiago’s recovery.

“In situations like any person having cancer, it is a moment to really pray for strength…. She appears to be in disagreement with [the] government [but] we will continue to pray for her strength and recovery,” he said.

In a separate statement, Communications Secretary Herminio Coloma said: “We are one with the people in praying for the health and recovery of Sen. Miriam Defensor-Santiago.”

“Despite her condition, she has devoted herself to the performance of her duties as a legislator and public servant,” Coloma said.

Santiago is a supporter of President Aquino, but it has not always been a smooth sailing for her and the Palace.

The President nominated Santiago to serve on the International Criminal Court, and she eventually became the first Filipino and first Asian from a developing country to sit on the tribunal that tries cases of genocide, war crimes, and crimes against humanity.

In 2012, Santiago was one of only three senators who voted to acquit then Chief Justice Renato Corona who was impeached for his failure to disclose his assets, a requirement for all public officials.–With a report from Nikko Dizon

Lacson on Santiago: ‘In all sincerity, I’ll pray for her recovery’