Cancer-stricken Santiago takes leave to seek treatment in US 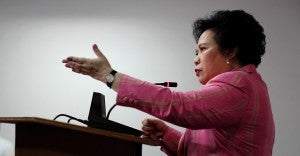 MANILA, Philippines–Senator Miriam Defensor-Santiago formally informed the Senate on Friday about her plan to seek medical treatment abroad, saying she would either “rise victorious” from cancer after six weeks or come back to the country in a “horizontal position.”

In a letter addressed to the Senate through its president, Senator Franklin Drilon, Santiago requested upon the advise of the Civil Service Commission an extension of what she called “qualified medical leave.”

She said “qualified medical leave” means that the Senate should continue to authorize her to carry out her duties when allowed by her doctors and by her physical medical condition.

Santiago said she first applied for “qualified medical leave” when she was diagnosed with chronic fatigue syndrome in early 2012.

“However, in the past few months, I have been diagnosed with lung cancer, Stage 4,” she said in the letter.

“I am now in the process of medication with a modern tablet version of chemotherapy. So far, it allows me to be mobile, with few side effects, such as weakness, dizziness, and short of breath. Hence, since I am not in good health, I appeal to our colleagues to continue my qualified leave.”

By the end of July, Santiago said, her doctors would assess whether the cancer pill has succeeded in shrinking the cancerous mass.

“If it does, I shall be as good as new. If it does not, I will have to fly for further treatment under the world’s top lung cancer specialist, Dr. Ronald Natale, at Cedars Sinai Hospital, Los Angeles. He is following closely the developments in my case,” she said.

“In brief, after about six weeks, I will either rise victorious from cancer, or come back to my country in a horizontal position. As Socrates said, which is better, God only knows.”

Santiago then thanked her colleagues, who have called or sent tokens of support and compassion.