Gigi Reyes wants to be transferred to bigger hospital 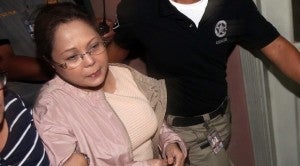 MANILA, Philippines–Lawyer Jessica Lucila “Gigi” Reyes, former chief of staff of Senator Juan Ponce Enrile asked the Sandiganbayan Third Division to allow her to be confined at a tertiary hospital after suffering from seizure following her transfer to Camp Bagong Diwa.

Reyes, who is facing graft and plunder cases in connection with the pork barrel scam, failed to appear in Friday’s arraignment. She is currently confined at the Taguig-Pateros District Hospital (TPDH).

In her clinical abstract prepared by Dr. Anthony Lontoc, her attending physician, Reyes was suffering from hypertensive urgency and Neurocirculatory Asthenia.

However, the findings were only an initial impression and “further evaluation is necessary to rule out possibility of underlying cardiac and neurologic pathology.

“From the foregoing, accused Reyes respectfully implores that this Honorable Court authorize and allow accused Reyes to be transferred to and confined at a tertiary hospital, preferably the Philippine Heart Center or the Sta. Ana Hospital where her attending physicians are connected so that the cardiac condition and neurologic pathology status of accused Reyes can be properly evaluated and addressed,” Reyes’ motion stated.

In the meantime, Reyes, through counsel Anacleto Diaz asked the anti-graft court that she be allowed to stay at TPDH.

Gigi Reyes conversant but no appetite–doctor