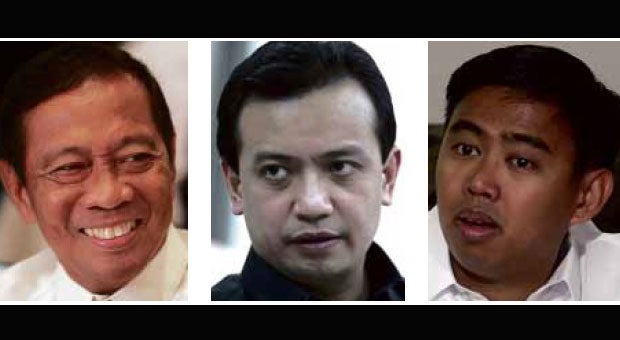 Corruption in Makati probably involves amounts larger than those in the infamous pork barrel scam, according to Sen. Antonio Trillanes IV.

While some senators have been charged with taking hundreds of millions of pesos in kickbacks in the pork barrel scam, Vice President Jejomar Binay is accused of skimming P2 billion from just one project, Trillanes told a media forum in Quezon City on Saturday.

Because Binay is a potential president, all the more reason that he should be scrutinized to find out who he is behind the advertisements and media coverage, the senator said.

He justified the Senate hearing into the alleged corruption in the Makati government as being in aid of legislation on how the local government procurement process is being circumvented.

“We’re establishing a pattern of behavior, the propensity to commit corruption,” said Trillanes, the proponent of the Senate investigation into the allegedly overpriced parking/office building of the Makati City Hall that was started when the Vice President was still the Makati mayor.

The Senate hearing has brought out other allegations of overpricing by the Makati local government, such as in Ospital ng Makati, Makati Science High School and complimentary birthday cakes that are given to senior citizens.

A prospective Binay presidency “could probably be worse” than that of the much-maligned administration of former President Gloria Macapagal-Arroyo, he said.

“There’s a lack of transparency and this is just Makati; what more if he’s in command of the national budget,” Trillanes said.

“I can see how senators are being cowed into not investigating. He’s just the Vice President and they’re already afraid of him,” he said.

He noted that under the Aquino administration, “you can speak up and criticize without fear that you’ll be harassed or even killed.”

Trillanes claimed to have insider information that President Aquino would not endorse Binay as his anointed candidate in 2016.

Binay on Saturday declined to comment on Trillanes’ statements and referred the Inquirer to the statement released yesterday by Navotas Rep. Toby Tiangco, secretary general of the United Nationalist Alliance.

Sen. Aquilino “Koko” Pimentel III, who chairs the blue ribbon subcommittee that is conducting the investigation, assured the Vice President that he could expect to be treated with fairness if and when he makes an appearance at the inquiry into the allegedly overpriced P2.3-billion Makati parking building.

Binay should expect the same treatment that was accorded his son, Makati Mayor Junjun Binay, at the first hearing last Wednesday.

“We treated the mayor fairly, and the assistant city engineer, all the more the Vice President,” Pimentel said in a phone interview.

“We wanted a fair fight, a fair exchange and a fair determination of on whose side the truth is,” he said.

While the blue ribbon sub-committee has yet to decide whether to invite the Vice President, Pimentel stressed the necessity of hearing the elder Binay’s testimony.

He said Binay was Makati mayor when construction began on the 11-story, 31,900-square-meter building in 2007, and that even his own son deferred to him on the matter.

Binay has accused the senators of politicking, referring in particular to Trillanes and Sen. Alan Peter Cayetano, who he said were aspiring for the presidency. Binay has declared his intention to run for president in 2016.

Pimentel said that if the allegations turn out to be baseless, the inquiry should stop.

Pimentel said he would confer with fellow senators on whether to invite the Vice President toward the end of the next hearing on Tuesday next week.

“Let all the evidence come in before we decide whether to invite him,” he said, noting that some new witnesses, including Vice Mayor Romulo Peña Jr. and former Vice Mayor Nestor Mercado, would appear.

“I think that’s no longer necessary. If they have other questions, they can ask the COA. What will he say, yes or no? It will just be a media event,” he said in a phone interview.

Two local politicians, Renato Bondal and Nicolas Enciso, both political rivals of the Binays, filed a plunder case against the latter over the allegedly overpriced building. This was what prompted Cayetano and Trillanes to call for a Senate inquiry.

At last Wednesday’s hearing, Mayor Binay justified the high cost of the parking building, claiming it was “world-class” and a “green building.”

The mayor presented a Commission on Audit (COA) evaluation report clearing the local government of the allegations of overprice. But higher-ranking COA officials said the report was not final.

COA Chair Grace Pulido-Tan told the committee that she had noticed “red flags,” including the fact that the project had been divided into five phases and that the contract had been awarded very fast.