MANILA, Philippines–Makati City has gained the distinction of having the most expensive parking building in the country if a group of Makati City residents are to be believed.

The group on Tuesday brought plunder and graft charges against Vice President Jejomar Binay, his son Makati Mayor Junjun Binay and 23 others over the alleged “unconscionable overpricing” in the construction of an 11-story parking building that the city government supposedly built for P1.56 billion.

In a complaint filed in the Office of the Ombudsman, lawyer Renato Bondal and Nicolas Enciso VI, of the Save Makati Movement, claimed that the New Makati City Parking Building on F. Zobel Street in Barangay (village) Poblacion was arguably “the most expensive parking building in the entire country.”

Mayor Junjun Binay said the complaint was nothing new and that it was “fabricated.”

The mayor noted that the filing of the complaint came just after the release of the results of a Pulse Asia survey showing that his father was the leading choice for president in the 2016 elections.

“Clearly, our opponents have become desperate to put my father down. Their intention is to malign him by raising baseless accusations like the ones raised in their so-called complaint,” the younger Binay said.

The Vice President is expected to issue a statement on Wednesday on the plunder complaint against him in a speech he is scheduled to deliver at the joint meeting of the Financial Executives Institute of the Philippines and the Management Association of the Philippines at the Intercontinental Manila hotel in Makati.

Accusing the father and son of “despicable mismanagement and gross abuse of public funds,” Bondal and Enciso also sought the preventive suspension of the Binays to keep them from influencing the investigation by the antigraft body.

They said the project, which took six years to complete, was started by the city government in 2007 when the elder Binay was the mayor of the country’s financial center.

The building has basement parking, a roof deck and five more floors of parking spaces with a total area of 31,928 square meters, Bondal and Enciso said.

“The overpricing of the building project could not have been committed without a deliberate, systematic and unconscionable raid [on] public funds designed by the Binays and the other respondents to defraud the people of Makati and gain personal profit in the process,” the complainants said in their nine-page joint affidavit.

“The respondents…violated every rule in construction manuals and government procedures in pushing for a project that was grossly overpriced and funded irregularly through supplemental budgets for five years,” they added.

The mayor, who has yet to get a copy of the complaint, said he had received information that there was a plan to file complaints against him, his father and other city officials.

At a press conference on June 16, the mayor exposed the plan of his political foes in the city to file complaints against him, the Vice President and other city officials in the Ombudsman.

Mayor Binay pointed out that the complainants did not include the names of their allies who were also present during the sessions of the city council. “This alone exposes the political motives of the complainants who are perennial contenders and serial losers in Makati elections.”

He said he was ready to face the allegations thrown at him, saying that the truth is on their side.

Despite the case, the younger Binay said he and his father would remain focused on their work. 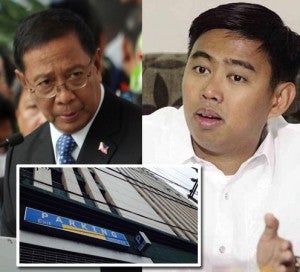 “We will continue working to improve the lives of our people, especially the poor. We will not be distracted by fabricated complaints that are clearly connected to the 2016 elections,” he said.

Cecille Cag-anan, the resident Commission on Audit (COA) auditor of the Makati City government, was likewise included as respondent in the case for her supposed failure to prevent the Binays and their coaccused from completing “an observably anomalous transaction.”

Enciso and Bondal said they were pursuing the case against the Binays “to give justice to the people of Makati and the Filipino people at large, who have been defrauded for six long years, with taxpayer money stolen using ordinances and through other official acts.”

In their complaint, the pair said then Mayor Jejomar Binay “proposed and approved” a city ordinance for the construction of the parking building in 2007 with an initial budget of P400 million.

At that time, they said the entire project should have cost only P245.6 million based on the construction cost estimate by the National Statistics Office (NSO) for commercial buildings in Makati.

“Even the initial appropriation of P400 million… is clearly overpriced by more than P154 million and should merit his being haled to court for plunder,” the complainants said.

From 2007 to 2013, they said the city council of Makati passed six more ordinances that authorized the father and son to apply for loans from the Land Bank of the Philippines to fund the project.

Citing NSO statistics, Bondal and Enciso said the city government should have paid only P7,691 per square meter of the parking building, but the project cost was jacked up to P48,859 per square meter when it was completed in 2013, or an “overprice” of close to 600 percent.

They said even the current prevailing construction cost of commercial structures in Makati was pegged at only P25,000 for every square meter.

“The total amount appropriated by respondents to cover the cost of construction as of 2012 was, however, P1.560 billion, or an overprice of more than P1.255 billion,” the complainants said.

Enciso and Bondal said the project was “characterized with grave irregularities, motivated by greed, personal aggrandizement and accumulation of ill-gotten wealth.”