Ramon Barba may not be your stereotypical scientist but this simple man’s technological breakthrough has propelled the country to become the second biggest mango exporter in the world.

With his languid smile and easy swagger, the 74-year-old takes pride in his work in plant physiology that has been adopted worldwide for simplifying the propagation of mango flowering.

Barba was conferred the Order of National Scientist by President Aquino this month for his significant contribution to the field of science and technology.

Barba describes his discovery of spraying potassium nitrate, or saltpeter, to induce mango flowering as “tsamba” (fluke) but the extensive research and the work he put in, as well as the international recognition he has achieved, say otherwise. 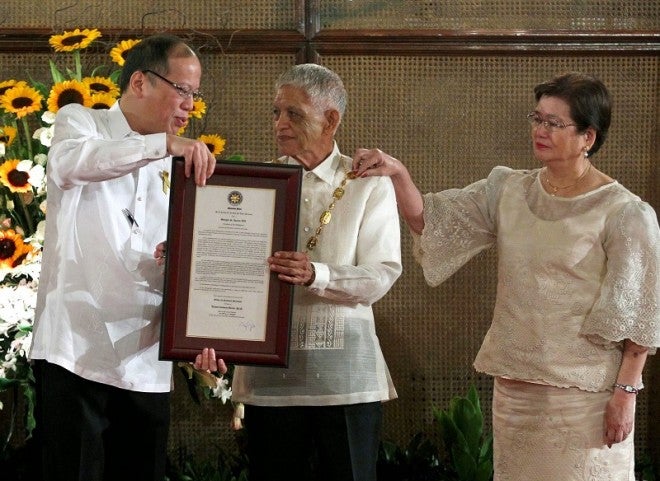 President Benigno S. Aquino III confers the Order of National Scientist on Dr. Ramon Barba, PhD. during the conferment ceremonies at the Rizal Hall of the Malacañang Palace on August 12, 2014. Dr. Barba received the Presidential Medallion for his distinguished achievements in the field of plant physiology, focusing on induction of flowering of mango and on micropropagation of important crop species that have earned him national and international accolades. Also in photo is Dr. Corazon Veron Cruz-Barba. CONTRIBUED PHOTO/ Gil Nartea / Malacañang Photo Bureau

“I got into horticulture quite by accident. I never really knew what I wanted to be while growing up,” Barba said, noting that peer pressure was what basically drove him to study agriculture at the University of the Philippines Los Baños (UPLB) in Laguna province in the 1950s.

He eventually majored in agronomy and fruit production, having been inspired by his grandfather, Juan Cabanas, a former officer of the Bureau of Plants Industry, and his college professor, Dr. L.G. Gonzales.

“Maybe the fact that I grew up in a small farm with fruit trees also had something to do with my decision,” he said.

Gonzales, considered the father of Philippine horticulture, convinced him to study fruits. According to Barba, the UPLB professor was then studying smudging or smoking out mango trees as a method of inducing flowering.

“It was a drawn-out controversy then. Some scientists were saying the heat generated from the smudging had something to do with it while others argued that the smoke had ethylene as an active ingredient. It wasn’t resolved until I was close to graduating,” he said.

After graduating in 1958, he was offered a teaching job at UPLB. “I was not even a conscientious student. All I knew was once I passed, it was over. I did not even know that I could teach,” Barba said, adding that the teaching position gave him an opportunity to work further with Gonzales in his research.

Gonzales’ interest on smudging to induce mango flowering, he said, basically rubbed off on him.

“You have to smoke out a mango tree for two continuous weeks to get results. It was very expensive because you had to burn lots and lots of grass to sustain,” Barba said, adding that families in Cebu province that were engaged in the practice earned lots of money out of one or two mango trees producing 10,000 fruits.

“It was very tedious but it paid off. I remember thinking at that time, ‘Is there an easier way?’” he said, pointing out that it was about the same period that he got a book on growth regulators written by Dr. A. Carl Leopold. The book basically discussed the application of chemicals on plants to make them grow faster and induce flowering.

He had to put off research on flowering when he received a scholarship for his graduate studies on horticulture at the University of Georgia. He moved on to the University of Hawaii for his doctorate in plant physiology, specializing in tropical fruits and tissue culture under the East-West Center grant.

Dr. Toshio Murashige, his adviser, offered to bring him along to the University of California under a scholarship for his successful work on tissue culture of tobacco from a single cell but Barba insisted on staying in Hawaii to complete his studies. The decision proved providential, as Leopold, whose book introduced him to growth regulators, taught advanced plant physiology at the university and eventually came up with a paper on Ethrel, with the main ingredient ethephon, as a plant growth regulator.

Leopold found that when ethephon is absorbed by plant tissues, it is broken down into naturally occurring compounds— carbon dioxide, phosphate and the plant hormone ethylene— causing thinning, loosening or ripening in various crops.

When Barba returned to the country in 1969 to resume his work as a professor at UPLB, he submitted a proposal to study the use of ethephon as a means to induce flowering in mangoes.

He was rejected and was told that a similar study was already being conducted.

“I argued that while we were both studying flowering in mangoes, we were using different chemical growth regulators,” he recalled, but it did little to convince UPLB, even after he included more chemicals in his list including potassium nitrate.

He was told that his work was a “duplication” and was rejected as a “waste of resource.”

He was still working at UPLB when couple Jose and Rita Quimson hired him as a consultant in their mango farm in San Jose Del Monte City, Bulacan province, reporting for work every Saturday. It was then that he got the idea of asking the couple to allow him to conduct experiments with growth regulators. The couple eventually agreed after he assured them that no plants would be harmed.

“I asked around for the chemicals to use in my research and only bought a 1-liter sprayer for P27 and P5 of potassium chloride. I sprayed Ethrel and potassium nitrate on alternate tree branches,” he said, adding that he was surprised when nodes started appearing a week later on the branches he sprayed with potassium nitrate. After two weeks, the nodes started to develop flowers on the mango tree branches and these eventually produced a high yield of fruits.

Barba said he never imagined that his research and experiment would start off a multibillion-peso industry in potassium nitrate, which has internationally become a popular flower inducer, and make the country’s mango industry flourish, contributing P40 billion annually to the economy.

Mexico fully used his discovery and emerged as the fruit’s top exporter, producing 41 percent of the world’s mangoes. The Philippines produces only 7 percent of the fruits for export, utilizing only 35,000 hectares for mango trees.

A 2008 World Intellectual Property Office documentary attributes the growth of the country’s mango industry, producing over 1 million tons, to Barba’s discovery, saying, “The prolific mango production in the Philippines is due in large measure to the ingenuity of one man (Barba) … His invention, widely used today, revolutionized the Philippine mango industry, making the crop one of the country’s top export earners.”

The novelty of Barba’s discovery is recognized by a local patent and in other countries, such as the United States, Australia, New Zealand and England, but the national scientist did not enforce the patents so that farmers could use the technology freely.

“A product research usually takes years to finish because you have to prove that the results can be replicated and that it will be widely accepted by the farmers, who are the end users, and has no side effects,” he said.

Potassium nitrate as a mango flower inducer was easily accepted by farmers because it was affordable and not harmful to people.

“It is very cheap and it was used in food as preservative so I was very confident that it will not have any side effect,” he said.

In not enforcing his patent, Barba said he was just happy that his product helped a lot of mango producers, which was the main reason for his discovery.

He soon developed Flush, which speeds up the growth and advances the fruiting of trees by accelerating their growth cycle per season, to complement his first breakthrough.

After succeeding in his studies in flowering, he reverted to his specialty of tissue culture. His work on micropropagation with the plant cell and tissue culture laboratory of the Institute of Plant Breeding at UPLB, where he remains a senior consultant, yielded changes in the production schemes of different crops.

Barba’s body of work was finally recognized big time when he was conferred by President Aquino the rank and title of national scientist for his achievements in plant physiology and micropropagation. The recognition came 40 years after he was named among the country’s 10 outstanding young men for agriculture in 1974.

Barba said he never really imagined that he would achieve the status of national scientist. “I just did something I wanted to do. I just did my job wanting to help do things better,” he said, adding that the appreciation by his superiors of his work motivated him to give every task his best.

He said his research usually focused on coming up with practical and simple solutions to problems that would seem complex. While other scientists tend to baffle, Barba simplifies, which is nothing but sheer genius.