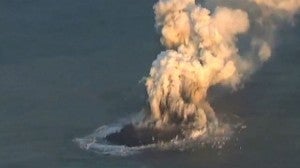 TOKYO, Japan — An erupting volcanic island that is expanding off Japan could trigger a tsunami if its freshly-formed lava slopes collapse into the sea, scientists said Tuesday.

The island’s craters are currently spewing out 200,000 cubic meters (7 million cubic feet) of lava every day — enough to fill 80 Olympic swimming pools — which is accumulating in its east, scientists said.

“If lava continues to mount on the eastern area, part of the island’s slopes could collapse and cause a tsunami,” warned Fukashi Maeno, assistant professor of the Earthquake Research Institute at the University of Tokyo.

He said a rockfall of 12 million cubic meters of lava would generate a one meter (three feet) tsunami that could travel faster than a bullet train, hitting the island of Chichijima — 130 kilometers away — in around 18 minutes, he said.

Chichijima, home to some 2,000 people, is the largest island in the Ogasawara archipelago, a wild and remote chain that is administratively part of Tokyo.

“The ideal way to monitor and avoid a natural disaster is to set up a new tsunami and earthquake detection system near the island, but it’s impossible for anyone to land on the island in the current situation,” Maeno added.

An official from the Japan Meteorological Agency, which monitors earthquakes and tsunamis, said the agency is watching for any signs of anything untoward.

“We studied the simulation this morning, and we are thinking of consulting with earthquake prediction experts… about the probability of this actually happening, and what kind of measures we would be able to take,” he said.

Japan’s northeast was ravaged by a huge tsunami in March 2011, when a massive undersea earthquake sent a wall of water barreling into the northeast coast, killing more than 18,000 people and wrecking whole towns.