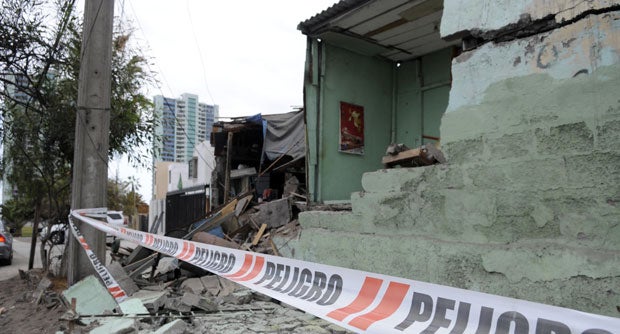 The Japan Meteorological Agency said waves of 20 centimeters (eight inches) were monitored in Kuji, Iwate prefecture, at 6:52 am (2152 GMT Wednesday).

Minor tsunamis were also monitored in several other areas of northern Japan, the agency said, adding that higher waves may hit Japan later.

Earlier in the day, Japan issued a tsunami advisory, saying waves of up to one meter (three feet) above normal sea levels may hit eastern Pacific coast regions, but were unlikely to cause damage.

Large areas of the coastline covered by the advisory were also hit by the 2011 quake and tsunami, which killed more than 18,000 people and triggered a nuclear accident in Fukushima.

The agency warned people to leave the coast but said it did not expect damage from the waves.

“Get out of the water and leave the coast immediately,” it said.

But it added: “Though there may be slight sea-level change in coastal regions, no tsunami damage is expected.”

Television footage showed local residents fleeing to nearby shelter in Kesennuma, Miyagi prefecture, where more than 1,000 people were killed in the 2011 tsunami.

Before dawn a tsunami warning siren echoed over Ishinomaki, another city hit hard by the tsunami three years ago, and some local bus services were cancelled.

Authorities in Japan and many other countries at risk of tsunamis have well-developed early warning systems and tend to be cautious.

Tokyo Electric Power, which runs the crippled Fukushima Daiichi plant, suspended part of operations scheduled for early Thursday near the sea shore at the plant in preparation for any waves, a company spokesman said.

In 1960, a 9.5-magnitude earthquake in Chile sent a tsunami across the Pacific that killed more than 140 people in Japan.

Indonesia also said it could be hit by a small tsunami from the quake off Chile, which killed at least six people and caused nearly a million to evacuate their homes along the coast.

Waves of up to half a meter had been expected to hit the eastern region of Papua shortly after 2200 GMT but officials said nothing had been detected so far.

“Until now there are no signs of even a small tsunami. We are monitoring closely,” Frangky Ulus from the Indonesia Tsunami Early Warning System in Jayapura, Papua, told AFP.

Authorities in 19 provinces of Indonesia were alerted earlier as a precaution and people were urged to stay away from beaches.

Indonesia, which is frequently hit by earthquakes and has scores of active volcanoes, is particular vulnerable to even small tsunamis as many people on the archipelago of more than 17,000 islands live in poor, coastal communities.

More than 170,000 people were killed in Aceh province on western Sumatra island in 2004 when it was hit by a huge quake-triggered tsunami, which also left thousands dead in other countries around the Indian Ocean.

In New Zealand and Australia, southeast of Indonesia, authorities said there was no tsunami threat to them.