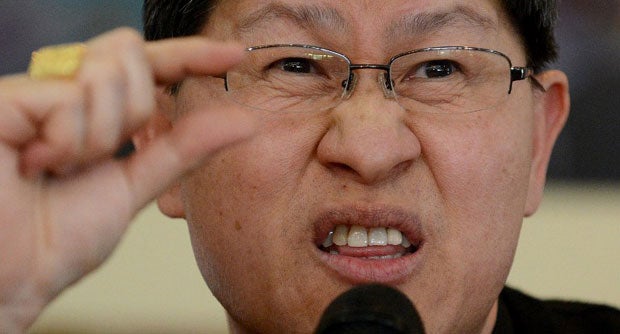 Cardinal Luis Antonio Tagle, Archbishop of Manila, gestures during a press conference at Manila International Airport after arriving from Rome on March 21, 2013. Tagle has expressed alarm over the rising unemployment and worsening poverty in the Philippines despite the highly touted economic growth rates. AFP

Tagle said that while the government should be commended for the robust economic growth the country had been experiencing, many Filipinos continued to be poor and jobless.

The prelate noted the paradox in an interview last week with Tele Care, a New York-based Catholic television network in the “Everyday Faith Live” program, where he also discussed the imbalances in the Philippine economy.

The cardinal flew to the United States last week to receive an honorary doctorate of humane letters from Fordham University.

“We have to salute our government and also the business sector. However, we were alarmed to see also that the level of poverty has not gone down,” Tagle was quoted as saying in the CBCP News, the official news service of the Catholic Bishops’ Conference of the Philippines.

He said it was “worth rejoicing” that the Philippines registered the highest gross domestic product growth rate in Southeast Asia last year.

“So you ask the question where is this growth going? How come there is this very accelerated growth economically, but ordinary people remained poor?” he said.

The Philippine Statistics Authority (PSA) recently reported an increase in unemployment among Filipinos despite economic growth in 2013 exceeding the targets.

The PSA said that in January, the unemployment rate climbed to 7.5 percent from last year’s 7.1 percent, the second-fastest in Asia next to China’s 7.7 percent.—Jocelyn R. Uy

28 years after Edsa: PH yet to win fight vs poverty

PH on track but has yet to address poverty, underemployment