Remains of Malaysian MH17 victims to be flown home 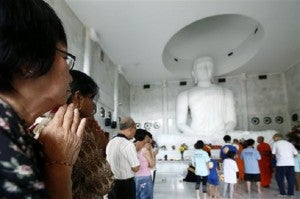 Malaysians pray during a special prayer for the victims of Malaysia Airlines Flight 17, in Kuala Lumpur Malaysia, Sunday, July 20, 2014. Malaysia’s transport minister said the country is “deeply concerned” that the site in Ukraine where the Malaysia Airlines jetliner was shot down with 298 people onboard “has not been properly secured.” AP/Vincent Thian

KUALA LUMPUR, Malaysia — Malaysia’s defense minister says the remains of at least 16 people killed when a jetliner was shot down over Ukraine last month will be returned to Malaysia this week.

All 298 people onboard died when Malaysia Airlines Flight 17 was shot down July 17. It was heading to Kuala Lumpur from Amsterdam and was shot down over an area of eastern Ukraine controlled by pro-Russia separatists.

With fighting between the rebels and Ukrainian forces ongoing near the crash site, victims’ remains were gathered and sent to the Netherlands for identification.

Malaysian Defense Minister Hishammuddin Hussein said Tuesday the remains of at least 15 Malaysian victims of the disaster and one Dutch national would arrive in Kuala Lumpur on Friday.