MANILA, Philippines–At least 38 passengers were injured when a wayward Metro Rail Transit 3 (MRT 3) train overshot the tracks at the Taft Avenue station at the corner of Edsa and Taft Avenue in Pasay City around 4 p.m. Wednesday.

The passengers were injured because of the impact and were rushed to San Juan de Dios and Pasay City General hospitals, said Senior Superintendent Florencio Teodosio Ortilla, the Pasay City police chief.

The train, which had broken down at the Magallanes station and had become nonoperational, was being pushed by an operational train toward Taft Avenue, the last station on the MRT line.

In a radio interview, MRT spokesman Hernando Cabrera said that as the second train was pushing the first, the coupler between the two broke, causing the first train to ram into the metal stopper, which gave way.

The train then broke through the metal railings at the end of the station and hit a lamppost, which fell to the ground because of the impact. A motorcycle parked right outside the station was crushed.

Around 38 passengers were wounded or suffered fractures and other injuries, said Transportation Secretary Joseph Emilio Abaya.

The standard operating procedure should have been to let passengers on the first train get off before it was pushed to the next station.

Cabrera said that because the first train had broken down due to technical difficulties, the automatic brake kicked in, a built-in safety feature to prevent runaway trains.

The brake was deactivated to allow the second train to push the first one forward so it could be brought to Taft for inspection.

The second train had to unload passengers at Magallanes station in order to push the first train. The whole procedure was standard MRT operation authorized by the assigned duty officer at the control center in Quezon City, Cabrera said.

Since the first train did not have its brakes on when the uncoupling happened, it freewheeled past the end of the rail and metal barrier, Cabrera added.

A video of the accident obtained by INQUIRER.net showed some passengers scampering to safety.

Abaya said police and MRT management were still investigating to see if the accident was caused by human or technical error. They were checking if the coupler was engaged properly before the trains ran or if it had uncoupled while the two trains were running.

It is also worth noting that the portion from Magallanes to Taft Avenue stations is a downward ride.

“Definitely there were some that suffered fractures,” Pasay City Mayor Antolino Calixto said.

Witnesses said the front part of the train–which usually carries women, children  and the elderly and the disabled–punched through the wire and concrete fence of the station before resting on the pedestrian lane between Edsa and the northbound side of Taft Avenue.
The driver of the train was brought to the MRT center for investigation, Calixto said.

“Three were seriously injured. A man suffered fracture on his foot while the others suffered lacerations,” Lo said.

Meanwhile in San Juan de Dios Hospital, eight individuals were admitted but their injuries were not critical.

Despite the accident, the MRT management said its operations remain normal, but passengers should expect delays.

Ortilla said MRT operations would not be stopped or delayed by the accident. Regular train schedules would still be followed.

The government, through the dotcmrt_3 Twitter account, said at 5:15 p.m. that the MRT 3 was operating both southbound and northbound lanes but delays should be expected when approaching the Taft station, as they were using a “single track” in reversing.

“MRT regrets the unfortunate incident. The management will extend all necessary assistance to those injured and who suffered inconveniences,” it said.

The Land Transportation Franchising and Regulatory Board (LTFRB) said it was ready to assist commuters in the aftermath of the accident.

The accident brings to the fore concerns about the integrity of MRT 3, one of three elevated railways serving Metro Manila that has been suffering from congestion. It currently serves well over half a million people every day, above its intended capacity of 350,000 per day.

In recent months, the line has drawn sharp criticism from riders for long queues at its stations during rush hours. Incidents include computer glitches and loss of power.

MRT 3 was also hit by a management shakeup in May, when then MRT 3 general manager Al Vitangcol III was sacked following conflict-of-interest allegations over a train maintenance deal.

In response to overcrowding at the railway line, one of the most inexpensive forms of public transportation in Metro Manila, the government has moved to acquire new trains.

The contract for 48 new train cars was eventually won by China’s Dalian Locomotive and Rolling Stock Co. The new trains, which will be delivered in batches, will arrive by the middle of 2015. 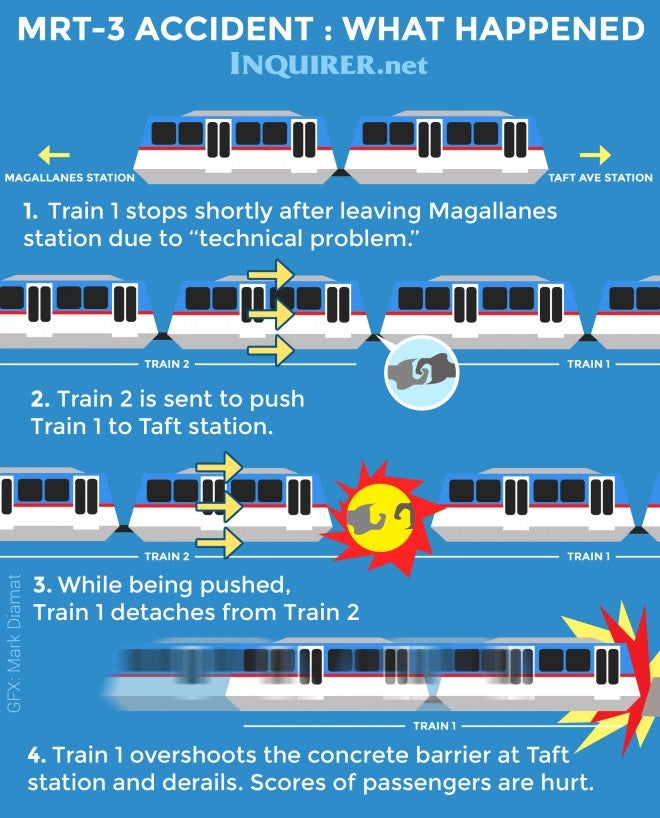 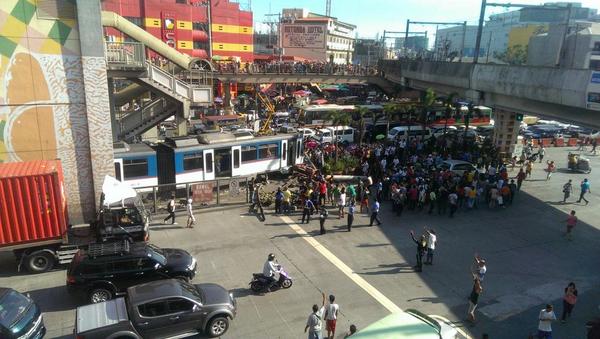 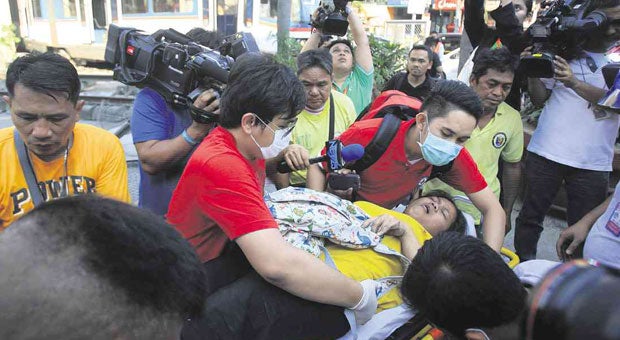 AN ACCIDENT WAITING TO HAPPEN Rescuers gather around the wreckage of an elevated commuter train that broke down at the Magallanes station and was being pushed by another train toward Taft Ave. station but derailed, skidded and rammed the Pasay station on Wednesday. One of the 38 injured passengers is taken to a nearby hospital. MARIANNE BERMUDEZ 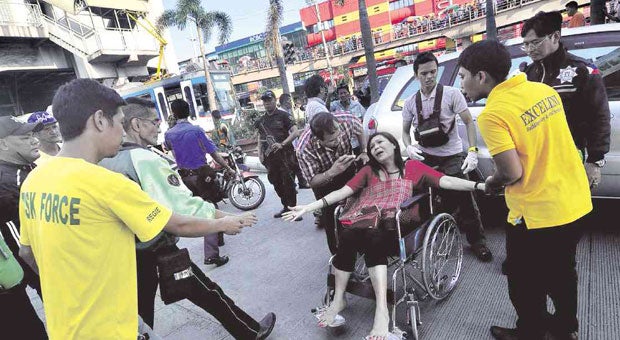 RUNAWAY TRAIN One of the 38 injured passengers is taken to a nearby hospital after an MRT 3 train overshot the railway at the end of the station on Edsa and Taft Avenue in Pasay City on Wednesday. RICHARD REYES 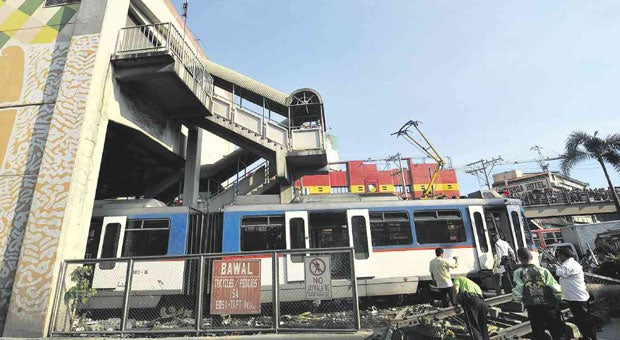 I hope people didn’t get hurt with the derailment of MRT. pic.twitter.com/a4rGIDefT8

The hazards of riding MRT-3