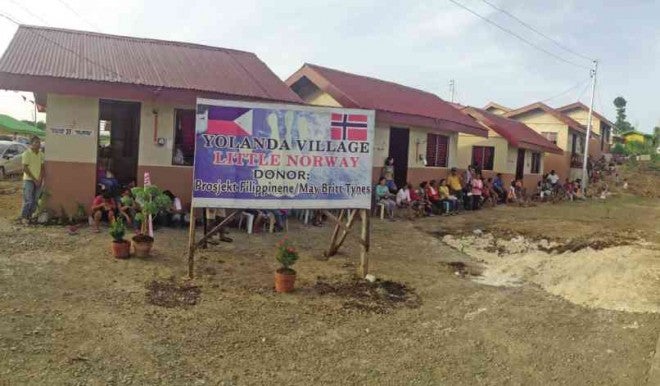 WHILE government officials had been busy meeting and discussing plans, private groups, like one from Norway, helped build new communities like this for survivors of Supertyphoon ‘Yolanda.’ CARMEL LOUIS MATUS/INQUIRER VISAYAS

In a speech before delegates to the 8th Philippine National Health Research System Week celebration held at the Radisson Blu Hotel here, Lacson said the 205,128 housing units would be put up in areas that have been determined as safe from hazard.

The areas will be evaluated by the Department of Science and Technology and the Department of Environment and Natural Resources (DENR) to ensure that these are safe from storm surge, flood, erosion, landslide, volcanic eruption and soil liquefaction, according to Lacson, presidential assistant for rehabilitation and recovery.

To put up the houses, Lacson said the government needs to find suitable land totaling 1,364 hectares (about the size of 32,476 basketball courts) with 150 houses per hectare.

The DENR has identified 4,165 ha of forest land as possible resettlement areas. A presidential proclamation needs to be issued to transfer these into alienable and disposable, according to Lacson.

But he said the National Housing Authority has found these identified areas unviable for housing resettlement as these are far-flung and would need right of way, roads and access to water sources.

“The agencies are coordinating efforts (to find resettlement areas),” Lacson told reporters on the sidelines of the conference.

Lacson’s office has submitted a P170.9 billion rehabilitation and recovery master plan for areas affected by the Nov. 8, 2013 Supertyphoon “Yolanda,” considered the strongest ever to hit land.

The areas include 171 cities and municipalities in 14 provinces in six regions.

The plan has yet to be approved by President Aquino.

“We hope this can be approved sooner or later so that there will be massive infusion of resources,” Lacson told reporters.

The funds are to be channeled to national agencies which will implement the projects.

But Lacson said he will recommend to the President the direct downloading of funds to local government units that have the capacity to implement the projects.

He said this will ensure simultaneous implementation of projects, which could take longer if left to the national government. 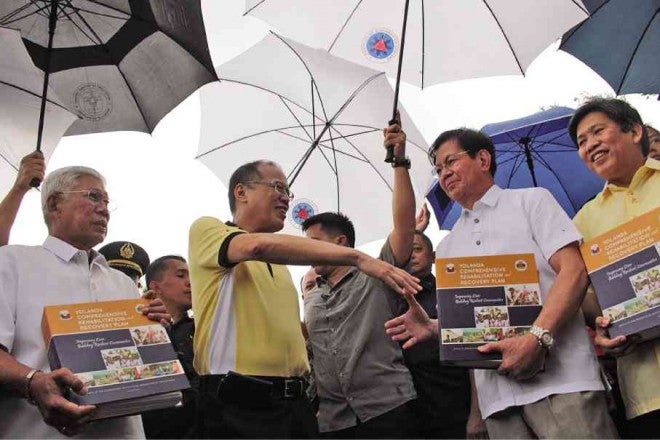 PROTECTED by umbrellas from rain, President Aquino receives a copy of the master plan for rehabilitation submitted by Panfilo Lacson, whose powers do not include implementing projects in the plan. JOAN BONDOC

The government aims to complete at least 80 percent of the rehabilitation projects by June 2016 when the term of the President ends.

In his speech at the conference that was attended by about 600 health scientists and researchers, Lacson reiterated his call to closely watch the implementation of projects and guard against corruption.

“If only one percent [of the funds] will leak, that means P1.7 billion in taxpayers money will be lost. We should all be concerned and we should all be guardians [because] all of us have a stake, not only the survivors,” he said.

Lacson’s office has set up the Electronic Management Platform: Accountability and Transparency Hub for Yolanda

(Empathy), a map-based monitoring platform capable of real time updates and reporting on the implementation of rehabilitation projects funded by the government and private donors.

Lacson said his office will submit to the President next week a draft order that will give his office more powers.

Currently, his office is charged with overseeing implementation and coordination of government agencies on rehabilitation and recovery efforts but has no authority in the implementation of projects.