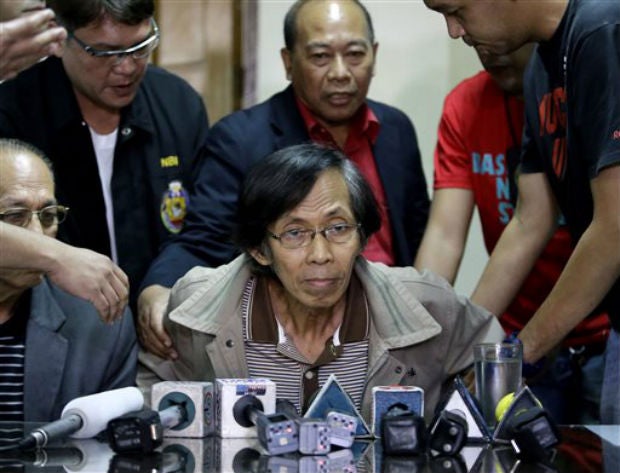 Former Army Gen. Jovito Palparan is helped to his seat during a news conference at the NBI following his capture Tuesday in Manila. AP

After nearly three years on the run Palparan was arrested early morning Tuesday in Sta. Mesa, Manila by operatives of the Anti-Organized Crime Division of the National Bureau of Investigation and the Armed Forces of the Philippines.

He is facing kidnapping and serious illegal detention charges over the disappearance of University of the Philippines students Karen Empeño and Sherlyn Cadapan in 2006.

His arraignment is set on August 18.

Palparan, 63, has been on the run since December 2011 after a court issued a warrant for his arrest in the kidnapping and disappearance of activists Empeño and Cadapan in Bulacan.

The two remain missing. The retired major general, who was in charge of a regional army unit, has denied any involvement.

Human rights groups and a UN investigator have blamed security forces for the deaths and disappearances of about 1,000 activists between 2001 and 2010 under Arroyo. The former president gave the military a free hand in what it called an all-out war against communist rebels.

Aquino’s government has said it wants justice for the missing students to improve the Philippines’ human rights record after a decade of abuses under the Arroyo administration.

In 2012, Aquino doubled the reward for the capture of  Palparan, along with a former governor wanted in the killing of an environmentalist and a former congressman convicted of murdering his wife, to P2 million ($45,600), with officials saying the President was unhappy at the lack of progress in arresting high-profile fugitives. With The Associated Press