MANILA, Philippines–Flight means guilt and retired Army Maj. Gen. Jovito Palparan’s lamming it for three years means he has responsibility for the disappearance of University of the Philippines students Karen Empeño and Sherlyn Cadapan, a state prosecutor said on Tuesday after the capture of one of the Philippines’ most-wanted fugitives.

Military and National Bureau of Investigation agents captured Palparan, 64, in his hideout in a neighborhood known to be a lair of communist New People’s Army (NPA) rebels in Manila’s Sta. Mesa district early Tuesday.

Palparan sent surrender feelers to President Aquino last year, but Aquino rejected his offer to surrender and ordered Defense Secretary Voltaire Gazmin to form a task force dedicated to the capture of the fugitive.

The end of the hunt for Palparan, former commander of the Philippine Army’s 7th Infantry Division, brought the government’s “Big Five” list down to three, and Malacañang said law enforcers would not stop until all of them were brought in.

The others on that list are Delfin Lee, alleged brains behind the P7-billion housing scam in Pampanga province, who was captured at Hyatt Regency Hotel and Casino in Manila on March 6; former Palawan Gov. Joel Reyes and his brother, former Coron Mayor Mario Reyes, who are wanted for the Jan. 24, 2011, murder of environmentalist and broadcaster Gerardo Ortega; and former Dinagat Rep. Ruben Ecleo, who is wanted for the 2002 murder of his wife, Alona, and running from a 31-year jail term for graft handed down by the Sandiganbayan in 2006.

Palparan has a P5-million price on his head. Lee had P2 million, and each of the others also P2 million.

“They continue to be on the list of high-profile and at-large suspects and our law enforcers continue to work to find them and make them accountable [for their crimes],” Communications Secretary Herminio Coloma told a news briefing in Malacañang.

The Palace commended the military and the NBI for capturing Palparan, fulfilling President Aquino’s promise to bring high-profile criminal suspects to justice.

“President Aquino promised that those who evade the law will be found. The promise to capture General Palparan has been fulfilled today,” presidential spokesman Edwin Lacierda said in a statement.

Later she said the NBI had submitted a report to the President, but “some of its contents could not be shared with the public.”

The report includes the names of the informants who will be given the P5-million reward for Palparan’s capture, according to NBI Director Virgilio Mendez.

“We have submitted two reports and included are the names of the informants,” Mendez said.

Assistant State Prosecutor Juan Pedro Navera, the lead prosecutor in the kidnapping and serious illegal detention case against Palparan and other military officers, said Palparan’s flight from justice for nearly three years had strengthened the government’s case involving the abduction and disappearance of Cadapan and Empeño.

“Flight is an indication of guilt. That’s well established. Remember that he appeared initially during the preliminary investigation of this case. He only went into hiding after we indicted him. So the aggravating circumstance already applies to him,” Navera told reporters on Tuesday.

Anotado and Osorio surrendered in December 2011 while Hilario remains at large.

The prosecution rested its case in the Malolos Regional Trial Court against Anotado and Osorio last year while the defense was given until Aug. 18 to present witnesses.

Back to square one

As for Palparan, Navera said the prosecution would start from square one in presenting evidence.

“We will have to repeat the same procedure all over again. We will present all the relevant witnesses, some of whom we have already presented against the other accused. There’s no choice but to present them again,” Navera said in an interview at the Department of Justice (DOJ) Tuesday afternoon.

Palparan, also a former party-list congressman, was captured at 3:30 a.m. in his hideout above a 24-hour bakery and coffee shop at Teresa and Old Sta. Mesa streets in Manila, just meters away from Polytechnic University of the Philippines and a police station. 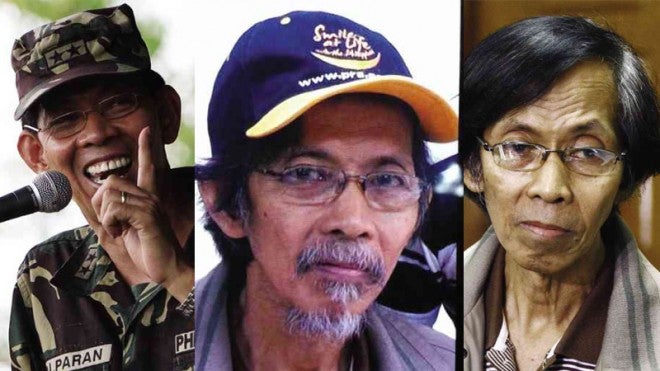 FUGITIVE GENERAL Retired Maj. Gen. Jovito Palparan, wanted for the disappearance of two University of the Philippines students, at the height of his power (left) commanded forces believed to have abducted and summarily executed activists. After three years in hiding, he was caught on Tuesday in Sta. Mesa, Manila, sporting long hair and a goatee. A clean-cut Palparan (right) was presented to the media at the National Bureau of Investigation. INQUIRER FILE PHOTO/NBI PHOTO/JOAN BONDOC

He is temporarily held at NBI headquarters in Manila.

“It was a joint operation by the AFP and the NBI. General Palparan should be turned over to the NBI because he is already a civilian. As such, he is no longer under the jurisdiction of the AFP,” Gazmin said.

Gazmin and Catapang acknowledged the difficulty the authorities had in finding Palparan, which they attributed to his knowledge of intelligence and combat operations.

“You know that he was a soldier, and he knows military tactics, techniques of escape and evasion, so he was able to apply those skills, plus he has friends who helped him hide,” Gazmin said, adding he was sure no one in the military aided Palparan in running from the law.

Catapang said Palparan offered no resistance when confronted by the law enforcers.

“In fact, when he was arrested, he said it was good that he had been caught, as he had ailments and he needed medical attention. He said he was a diabetic,” Catapang said.

Catapang said a Naval Intelligence and Security Force (NISF) informant tipped off the government to Palparan’s whereabouts after spotting the fugitive withdrawing money from an automated teller machine in Sta. Mesa.

Asked where Palparan would be held, Navera said the prosecution panel would comment after the former general’s side had made a manifestation.

“Normally, he would be detained [in a jail] nearest the court trying the case, which means ideally, he should be detained at the Bulacan Provincial Jail … We have to await the manifestation of Palparan before we can address whether we can object or argue as to where he should be properly detained. But I heard he will not invoke hospital arrest,” Navera said.

NBI sources said informants had traced Palparan to the Sta. Mesa house, the entrance to which was about 3 meters away from the road and had a steel door that was always closed. 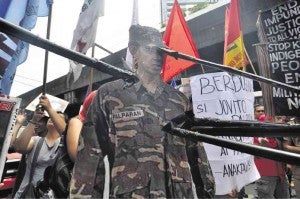 POKING FUN AT ‘BERDUGO’ In a rally at the NBI headquarters in Manila where Palparan is held, activists use spears to poke [fun] at an effigy of the man they call “berdugo” (butcher). RICHARD A. REYES

“Palparan could see the school and the activities below from the window of his safe house,” said Rommel Vallejo, head of the NBI Anti-Organized Crime Division.

In a news conference at NBI headquarters, Palparan denied he chose that place because it was the last place where the authorities would look for him.

“I did not think of it that way. It’s just now that I realized its irony,” he said.

He said he knew who ratted on him, but added he had no ill feelings toward them.

Palparan praised the NBI for finding him, saying he never sensed the authorities were closing in on him.

“I do not feel I was betrayed, because I barely knew the informants. I slipped and the NBI was good. My failure was their success. This is the first time that my intelligence failed me. I did not get advanced information,” Palparan said.

He said he had been hiding in many places, all in Metro Manila.

“I do not have money to leave the country and could not afford to live abroad so I stayed in Metro Manila where I am familiar with the terrain,” he said.

No support from military

Palparan denied he had been hiding in Army headquarters at Camp Aguinaldo, receiving support from officers in active service. But he acknowledged getting support from former followers in the service and in his party-list circle.

He also denied receiving support from former President and now Pampanga Rep. Gloria Macapagal-Arroyo, who praised him in her State of the Nation Address to a joint session of Congress in 2006.

Vallejo said Palparan was sleeping when his men and the Naval Intelligence Group swooped on his safe house at around 3:30 a.m. on Tuesday.

Palparan, who sported a goatee and long hair, “looked despondent and far different from a proud man when we arrested him,” Vallejo said.

He added that two people were arrested with Palparan.

Palparan in an interview at NBI headquarters after his arrest confirmed that he sent surrender feelers to President Aquino, but was turned down.

He said the President told his classmates who contacted the Palace that he should coordinate his surrender with Gazmin.

“I continued to hide after President Aquino declined that I [surrender] to him, I wanted to personally surrender to the President for security reasons,” he said.

Vallejo said NBI agents had close calls with Palparan in other locations, but the breakthrough came on Sunday when an informant spotted him outside the safe house.

“We were watching the house since Sunday and we decided to enter the safe house after an agent who peeped through a hole in one of the closed windows confirmed the presence of the fugitive,” Vallejo said.

He added that Palparan was unarmed and quickly identified himself when he saw the arresting officers.

“He did not resist and immediately identified himself and even showed us identification cards to show that he was General Palparan,” Vallejo said.

Mendez said the NBI’s priority was to ensure Palparan’s safety but he would not be given special treatment.

“He had no request but his security,” Mendez told reporters.

He said Palparan would be temporarily detained in the NBI pending a commitment order from the court.–With reports from Nikko Dizon, Cynthia D. Balana and Julie M. Aurelio

Palparan wanted to surrender but feared for his life

Read Next
Solon to take fight vs hidden pork to SC
EDITORS' PICK
Omicron variant detected in more countries as scientists race to find answers
Legarda: Ending Violence Against Women, a cause for all
Villar Group gears up for AllValue Shopping Party on Dec. 3; around P 1-million promos and discounts up for grabs
A delightful blessing!
Gov’t eyeing COVID-19 vaccine booster for essential workers, indigents by Dec. 10
Gov’t plans to open COVID-19 vaccination for 5- to 11-yr-olds by January 2022
MOST READ
Quiboloy warns of ‘much worse than Omicron virus’ if his ‘persecution’ is not stopped
Two cases of Omicron variant detected in Canada, govt’ says
MMDA: Number coding during afternoon rush hours back this week
Marcoleta defends pol ads on ABS-CBN
Don't miss out on the latest news and information.