Solon to take fight vs hidden pork to SC 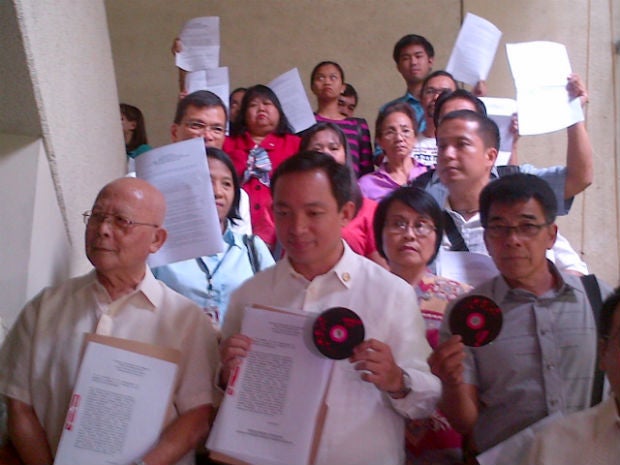 MANILA, Philippines–ACT Teachers Rep. Antonio Tinio on Tuesday said he would carry the fight to stop the disbursement of P20.7 billion in “hidden pork” in this year’s budget to the Supreme Court and the Office of the Ombudsman.

Tinio’s group was frustrated in impeaching President Aquino for allegedly willfully endorsing the continued implementation of a pork barrel system in this year’s budget because it was deemed too late to beat the one-year ban on impeachment complaints.

“We would ask the Supreme Court to immediately issue a TRO (temporary restraining order) on the 2014 pork funds,” Tinio said in a text message.

Tinio said his group would also ask the Ombudsman to investigate further how the President and his Cabinet allegedly connived with lawmakers to continue the pork barrel system in the 2014 budget in breach of the Supreme Court ruling last year which declared the Priority Development Assistance Fund (PDAF) unconstitutional.

“Our plan is to file possible criminal and other charges after the President steps down,” Tinio said.

“Even the Cabinet members know that giving lawmakers the equivalent of P70 million in pork each in the 2014 budget is illegal but they are still doing it. The President did not let go of the tools of the trade of traditional politicians,” Tinio said.

Licuanan told representatives in an executive session of the House appropriations committee on Aug. 4 that the additional P14-million scholarship grants distributed to the agency’s regional directors were actually reserved for the lawmakers’ handpicked beneficiaries.

Garin, a former Iloilo representative, also said during a House meeting on May 20 that the DOH had released medical grants to state hospitals and that the government had loosened up the processing requirements to allow faster transactions for their designated patients.

In a statement on Tuesday, Licuanan denied Tinio’s allegations. She stressed that the CHEd did not have pork barrel funds. She said that when the Supreme Court decided against the PDAF in November last year, the funds for the implementation of the programs approved by Congress were assigned to executive departments.

“The CHEd has been assigned the responsibility of administering the P4.1 billion in supplemental funds in 2014 for scholarships and grants for deserving students,” she pointed out, adding that her agency had issued a policy defining its actions regarding the supplemental funds abiding by both the decision of the high tribunal and the General Appropriations Act (GAA) 2014 provisions on scholarships.

“The lawmakers were given the opportunity to recommend their beneficiaries to CHEd but subject to these guidelines,” she said.  “Underlying these established systems and procedures is the principle that the provision of assistance to poor but deserving Filipinos shall be transparent, open and fair to all who are qualified for the grants and scholarships, pursuant to reasonable guidelines and standards.”

During the regular press briefing on Tuesday, Communications Secretary Herminio Coloma was asked if Malacañang was aware that the CHEd and DOH had allowed congressmen to dip their fingers in disallowed pork this year.

“I will just reiterate the guiding principle of the executive,” Coloma said. “The 2014 national budget was enacted in a lawful manner and the executive branch followed the law, including the Supreme Court regarding that, and Congress also followed [the same order] in passing the budget.”

“If there’s any citizen or individual or organization that believes that there was a violation of the law, they can seek redress under our Constitution and our laws,” he added.

Bayan Muna Rep. Neri Colmenares on Tuesday reacted to a threat by Parañaque Rep. Gustavo Tambunting and Ako Bicol Rep. Rodel Batocabe that they would file an ethics complaint against Tinio for releasing confidential information extracted during an executive session.

“Representative Tinio did not violate the wiretapping law because the hearings he recorded were conducted by public officials discussing the allocation of public funds in a public venue,” Colmenares said. “The wiretapping law only pertains to a private conversation. The claim that an executive session is akin to a private conversation is bereft of any legal basis.–With reports from Jeannette I. Andrade, Christian V. Esguerra and DJ Yap

No Secretary General to receive 4th impeachment rap vs Aquino