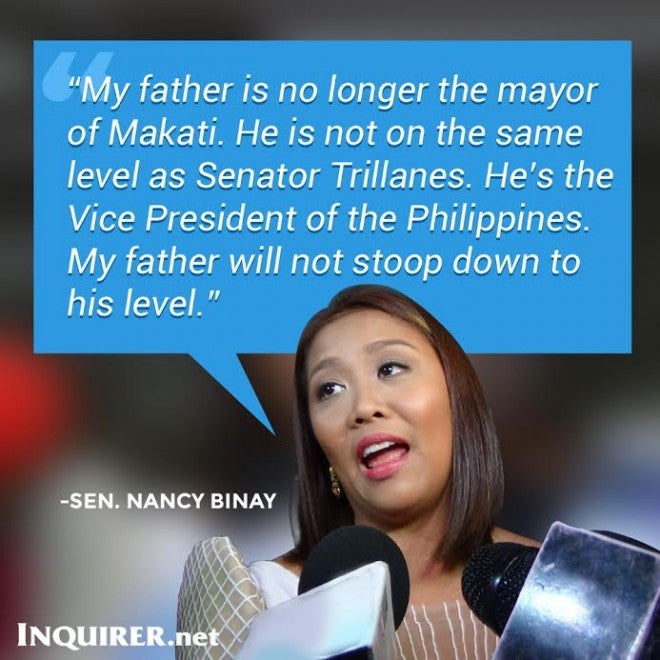 MANILA, Philippines – “My father will not stoop down to his level,” Senator Nancy Binay on Wednesday said of Senator Antonio “Sonny” Trillanes IV.

She issued the statement as she thumbed down Trillanes’ proposal that Vice President Jejomar Binay should face the Senate investigation into the alleged “overpriced” carpark building in Makati City.

It was Trillanes who filed a resolution asking the Senate to look into the issue involving the Vice President and his son, Makati Mayor Jejomar Erwin “Jun-Jun” Binay. The Senate is set to start its inquiry next week.

But Senator Binay said there was no need to invite the Vice President since her brother had already answered the allegations.

“Hindi na ho mayor ng Makati ang aking ama. Hindi n’ya ho ka-level si Senator Trillanes. He’s the Vice President of the Philippines. My father will not stoop down to his level,” she said in an interview over DWIZ.

(My father is no longer the mayor of Makati. He is not on the same level as Senator Trillanes. He’s the Vice President of the Philippines. My father will not stoop down to his level.)

The lady senator also noted how Trillanes treated invited previous resource persons to a congressional inquiry, citing as example as the case of the late Defense Secretary Angelo Reyes.

(My father also has to protect the dignity of his office. That’s why I dare him that the right process should be in the impeachment court because a certain courtesy should be given to the President and the Vice President.)

Senator Binay said she was serious when she dared Trillanes Tuesday to just file an impeachment complaint against the Vice President.

(As I said, Senator Trillanes should be a man and get real because his resolution is not in aid of legislation, but a demolition job against my father.)

She noted that Trillanes’ resolution was full of graft and corruption allegations, which she said should be addressed in an impeachment proceeding since the Vice President is an impeachable officer.

(You know my father is not the mayor of Makati, he is the Vice President of the Philippines. The right process if there are graft and corruption allegations against him is to file an impeachment complaint against him.)