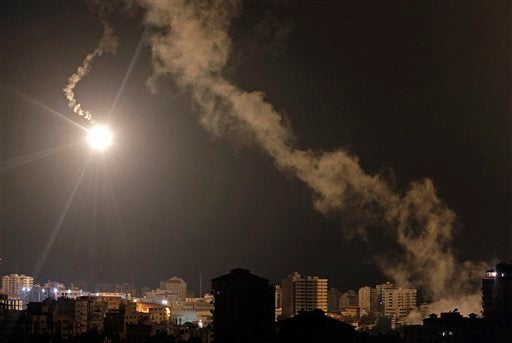 Israeli forces’ flares light up the night sky of Gaza City on early Tuesday, July 29, 2014. A truce between Israel and Hamas militants in Gaza remained elusive as diplomats sought to end the fighting at the start of the Eid al-Fitr holiday, marking the end of the Muslim holy month of Ramadan. AP

GAZA CITY, Gaza Strip — Israel struck symbols of Hamas’ control of Gaza and the strip’s only power plant on Tuesday, escalating its military campaign against the Islamic militant group with the heaviest bombardment in the fighting so far.

Flares turned the sky over Gaza City orange overnight and by daybreak, as the conflict entered its fourth week, heavy clouds of dust hovered over the territory.

The pounding came after Israeli Prime Minister Benjamin Netanyahu on Monday warned of a “prolonged” campaign against Hamas.

Israeli warplanes carried out dozens of attacks, leveling the home of the top Hamas leader in Gaza, Ismail Haniyeh, and damaging the offices of the movement’s Al-Aqsa satellite TV station, a central mosque in Gaza City and government offices.

Gaza’s power plant was forced to shut down after two tank shells hit one of three fuel tanks, said Jamal Dardasawi, a spokesman for Gaza’s electricity distribution company. The shelling sparked a large fire and a huge column of smoke was seen rising from the site. Dardasawi said 15 workers were trapped inside by the fire and that the damage would take months to repair. There was no immediate word on casualties.

Even before the shutdown, Gaza residents only had electricity for about three hours a day because fighting had damaged power lines.

Lt. Col. Peter Lerner, an Israeli military spokesman, did not comment on the explosion at the plant, but told The Associated Press that Israel’s latest strikes signal “a gradual increase in the pressure” on Hamas. 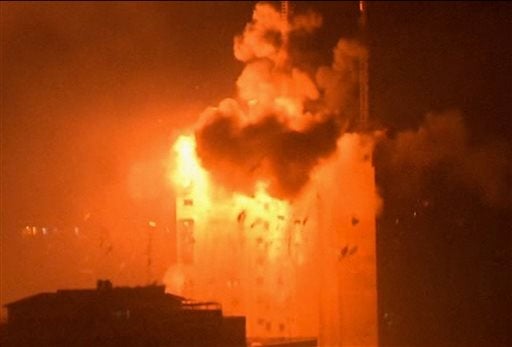 In this image taken from video an explosion hits the media complex that houses the offices of Hamas-run Al Aqsa television and radio in central Gaza City early on Tuesday, July 29, 2014. The building also houses offices of a number of Arab satellite television news channels. AP

“Israel is “determined to strike this organization and relieve us of this threat,” Lerner said.

Hamas also signaled defiance. Haniyeh, whose house had been turned into a mountain of rubble by an airstrike before dawn Tuesday, said in a statement that “destroying stones will not break our determination.” No one was hurt in the hit on Haniyeh’s home and he was not there at the time of the strike.

Since the start of the war, Israel has targeted several homes of Hamas leaders but none was killed presumably as they appear to have gone into hiding.

International calls for an unconditional cease-fire have been mounting in recent days, as the extent of the destruction in Gaza became more apparent.

More than 1,110 Palestinians have been killed and more than 6,500 wounded since July 8, according to Ashraf al-Kidra, an official at the Hamas-run Health Ministry. The U.N. has estimated that 75 percent of those killed are civilians.

Israel has lost 53 soldiers, along with two civilians and a Thai worker.

Tens of thousands of Gazans have been displaced by fighting in the border areas, which have come under heavy tank fire. Late Monday, Israel urged residents of three large neighborhoods in northeastern Gaza to leave their homes and immediate head to Gaza City.

Despite appeals for a cease-fire, both sides have been holding out for bigger gains.

Hamas has said it will not stop fighting until it wins international guarantees that a crippling border blockade of Gaza will be lifted. Israel and Egypt had imposed the closure after Hamas seized Gaza in 2007, defeating forces loyal to their political rival, Palestinian President Mahmoud Abbas. Over the past year, Egypt has further tightened restrictions, shutting down hundreds of smuggling tunnels under the Egypt-Gaza border that had provide crucial tax income to Hamas. The closure of the tunnels drove Hamas into a severe financial crisis.

Israel has said it is defending its citizens against attack from Gaza by hitting Hamas rocket launchers, weapons storage sites and military tunnels under the Gaza-Israel border.

Israel said its troops will not leave Gaza until they have demolished the tunnels which have been used by Hamas to sneak into Israel to try to carry out attacks. On Monday, Gaza militants infiltrated through one of the tunnels and killed five soldiers in a firefight. One of the assailants was also killed. Separately, four Israeli soldiers were killed by mortar shells from Gaza that hit southern Israel.

The Israeli army says it has destroyed close to 20 of 31 identified tunnels, but media reports said 10 more tunnels are believed to be in areas of Gaza still outside Israeli control.

After the deaths of the soldiers, Netanyahu signaled that Israel is intensifying its air- and ground campaign. “We will continue to act aggressively and responsibly until the mission is completed to protect our citizens, soldiers and children.”

Overnight, Israel carried out about 70 airstrikes, the military said.

Haniyeh’s house, located in a narrow alley of the Shati refugee camp, was reduced to rubble. Residents placed a large framed portrait of Haniyeh atop the rubble, and draped Hamas flags and Palestinian national banners over the debris.