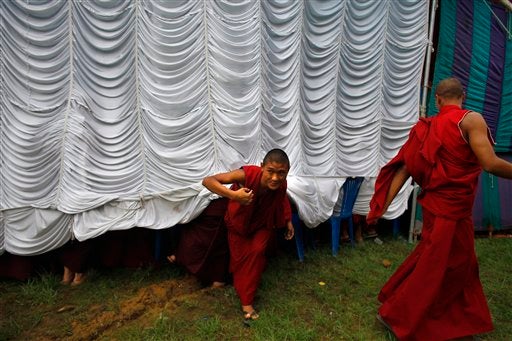 A Tibetan monk gets out from a tent to the backstage during celebrations to mark the birthday of their spiritual leader the Dalai Lama in Katmandu, Nepal, Sunday, July 6, 2014. AP

KATMANDU, Nepal — Nepal’s government says it will allow the body of a revered Tibetan Buddhist monk to be brought into the country and cremated.

Information Minister Minendra Risal says it was decided at a Cabinet meeting Tuesday that Shamar Rinpoche’s body can be brought in from India and cremated at his monastery just outside Katmandu, Nepal’s capital.

Nepal’s government had initially stopped Rinpoche’s followers from bringing the body into the country, saying the monk was a Bhutanese national. Some accused the government of fearing anti-China protests by Tibetans during the funeral procession, which is expected to be attended by thousands of Rinpoche’s followers.

Nepal does not allow Tibetan exiles to protest against China, and police are quick to break up any demonstrations.

The cremation is expected to take place Thursday.