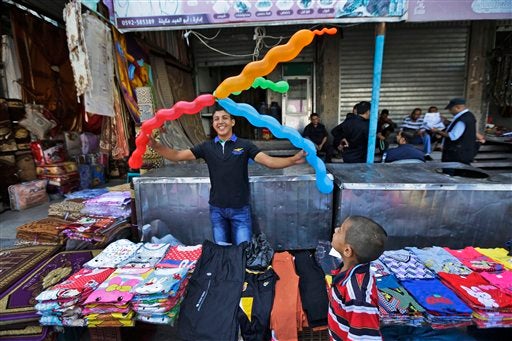 A Palestinian vendor plays with balloons at the market in the Jebaliya refugee camp, northern Gaza Strip, Sunday, July 27, 2014. AP

GAZA CITY, Gaza Strip—Israel and Hamas launched new attacks Sunday in the raging Gaza war, despite going back and forth over proposals for a temporary halt to nearly three weeks of fighting ahead of a major Muslim holiday.

The failure to reach even a brief humanitarian lull in the fighting illustrated the difficulties in securing a more permanent truce as the sides remain far apart on their terms.

After initially rejecting an Israeli offer Saturday for a 24-hour truce, Hamas said Sunday that it had agreed to hold fire ahead of the Eid al-Fitr holiday marking the end of the Muslim fasting month of Ramadan. But as Israel’s Cabinet met to discuss the offer and the ongoing war, rockets rained down on southern Israel and Israeli strikes could be heard in Gaza.

Each side blamed the other for scuttling the efforts.

Hamas said that “due to the lack of commitment” by Israel, it resumed its fire. Israeli Prime Minister Benjamin Netanyahu said that Hamas showed it could not be trusted after it violated other cease-fire efforts.

“Israel is not obliged and is not going to let a terrorist organization decide when it’s convenient to fire at our cities, at our people, and when it’s not,” Netanyahu said in satellite interviews from Israel carried on United States network Sunday news programs.

In a phone call later Sunday, President Barack Obama told Netanyahu the United States is growing more concerned about the rising Palestinian death toll and the worsening humanitarian conditions in Gaza. The White House said Obama reiterated that Israel has a right to defend itself and condemned Hamas rocket attacks that have killed Israelis, but pushed for an immediate cease-fire.

International diplomats had hoped a temporary lull could be expanded into a more sustainable truce to end the bloodshed and United Natins chief Ban Ki-moon urged the sides on Sunday to accept a 24-hour break in fighting.

However, both sides were holding out for bigger gains in the Gaza war.

Hamas wants to break the seven-year blockade of Gaza and believes the only way to force serious negotiations on ending the closure is to keep fighting. Israel, which launched the war on July 8 to halt relentless Hamas rocket fire on its cities, wants more time to destroy Hamas’ rocket arsenal and the military tunnels the Islamic militants use to infiltrate into Israel and smuggle weapons.

The 20-day war has killed more than 1,030 Palestinians, mainly civilians, according to the Palestinian health ministry. Israel has lost 43 soldiers, as well as two Israeli civilians and a Thai worker killed by rocket and mortar attacks from Gaza, the Israeli military said.

Following Hamas’ call for a break in fighting, an Israeli airstrike killed one person in Gaza when it hit a vehicle carrying municipal workers on their way to fix water pipes, the Palestinian Red Crescent said.

In southern Israel, one person was injured and a house was damaged by a rocket launched from Gaza, Israeli police said. The Israeli military said more than 50 rockets were fired Sunday.

Ahead of the three-day Eid al-Fitr holiday, which begins Monday, families in Gaza ordinarily would be busy with preparations, with children getting new clothes, shoes and haircuts, and families visiting each other.

But business was slow in the outdoor market of the Jebaliya refugee camp, where vendors set up stands with clothes and shoes. Hamed Abul Atta, 22, a shoe salesman, said he hadn’t made a single sale in the first three hours after opening.

Abul Atta said he and his family were staying with relatives after fleeing the Shijaiyah district of Gaza City, which has seen heavy fighting. He said a cousin and three other relatives were among dozens of people killed there last week.

“We can’t feel any joy right now,” he said when asked if he would mark the holiday.

Meanwhile, the Israeli military acknowledged firing a mortar shell that hit the courtyard of a U.N. school in Gaza last week, but said the yard was empty at the time and that the shell could not have killed anyone.

Palestinian officials have said three Israeli tank shells hit the school in the town of Beit Hanoun on Thursday, killing 16 people and wounding scores. The school served as a shelter for Palestinians displaced by the Gaza fighting. At the time of the incident, witnesses said they were being urged to evacuate because of nearby clashes.

Lieutenant Colonel Peter Lerner, an Israeli army spokesman, said Sunday that a military probe shows that “a single errant mortar landed,” but that it is “extremely unlikely that anybody was killed as a result of this mortar.”

Thirty seconds of footage released by the military showed what it said was the empty courtyard and a blast, apparently from the mortar. It was impossible to determine exactly when the footage was filmed.

Israel said it had warned people to leave the area for days ahead of time. The U.N. said it had been trying to achieve a humanitarian pause in the fighting to allow the evacuation of civilians from the area.

Photos from the scene shortly afterward showed bloodstains and people’s belongings strewn about.

Despite the high death toll, the Israeli military says it is doing its utmost to prevent civilian casualties, including by sending evacuation warnings to residents in targeted areas, and blames Hamas for putting civilians in harm’s way.

More than 160,000 displaced Palestinians have sought shelter at dozens of U.N. schools, an eight-fold increase since the start of Israel’s ground operation more than a week ago, the U.N. said.

Hamas and other militants in Gaza have fired more than 2,400 rockets at Israel since hostilities began on July 8, many deep into the Israeli heartland and toward most of the country’s major cities.

Israeli airstrikes have destroyed hundreds of homes, including close to 500 in direct hits, according to Palestinian rights groups. Entire Gaza neighborhoods near the border have been reduced to rubble.

More than 140 bodies pulled from Gaza rubble in truce—medics