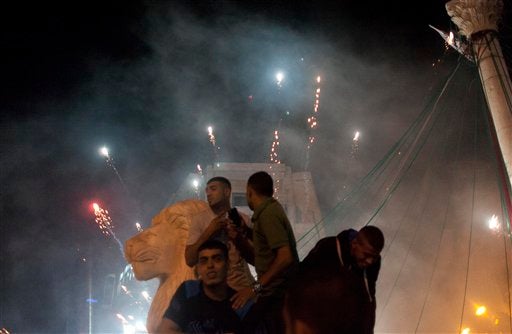 WASHINGTON — The leader of Hamas is demanding anew that Israel end its occupation of Gaza and the West Bank.

Khaled Meshaal said in an interview broadcast Monday that he believes the world hasn’t taken an even-handed view of the Israeli-Palestinian conflict.

Meshaal complained that Palestinians too frequently have to hear pleas for the security of the Jewish state, asking “why don’t you give it to Palestinians?”

Asked if Hamas believes there’s only a military solution to the longstanding regional conflict, he said, “As a Palestinian, I want to be liberalized. I want to live without occupation.”

“Did you not kick the British out,” he asked Rose, speaking through a translator. He called occupation “the worst thing you can imagine.”

Asked point-blank if he would recognize Israel’s right to exist, Meshaal replied, “No.”

Yet, Meshaal declined to say whether he would recognize Israel if it withdrew from the territories.

In war-struck Gaza, civilians struggle to get by