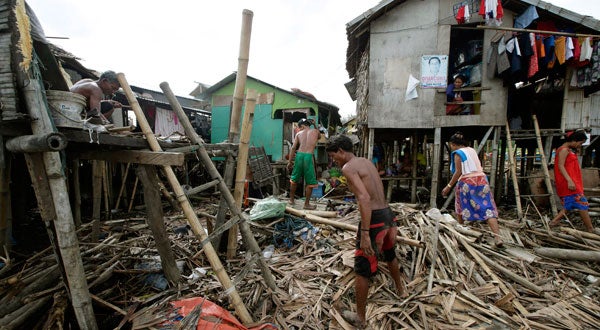 Sea gypsies known as “Badjaos” rummage through the debris after Typhoon Rammasun struck the coastal village of Bajaoan, in Batangas city, 100 kilometers (62 miles) south of Manila, Philippines Thursday, July 17, 2014. Typhoon Rammasun (locally known as Glenda) ravaged central and northern Philippines, including this province, leaving dozens of people dead, knocking out power in many areas and damaging agriculture and infrastructure. AP

Of the number, 67 came from Region IV-A (Calabarzon region). The badly hit province of Quezon recorded at least 26 deaths, many of which were caused by falling trees, walls and roof.

Two died in Brgy. Luctob, Macalelon after the wall of the evacuation center they were staying in collapsed.

Meanwhile, there are still six people missing, three from Lipa City, two fishermen from Northern Samar and one from Marinduque.

The number of injured people had also risen to 317. Many of them were hit by debris.