MANILA, Philippines—The death toll from Typhoon “Glenda” (international name: “Rammasun”) rose to 77, with 5 people still missing and 202 injured in the seven regions affected by the seventh weather disturbance to hit the country this year. 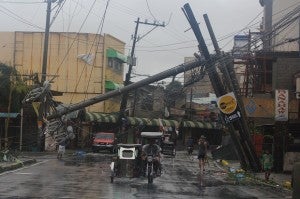 According to an official report by the National Disaster Risk Reduction and Management Council (NDRRMC), 54 of the 77 killed were from the Calabarzon region, with 19 of the fatalities from Quezon dying from drowning or being hit by flying objects. The other fatalities suffered heart attacks or died after being pinned under fallen trees and collapsed walls.

Of the five men who remained missing, two were fishermen from Northern Samar, one from Quezon, another from Batangas and still another from Marinduque.

As reports from the regions on Glenda’s destructive fury continued to pour in on Saturday, NDRRMC officials were starting preparations for tropical storm “Henry” (international name: “Matmo”) which intensified into a typhoon yesterday but is still not expected to directly affect the country.

Weather forecasters anticipate Henry to stay away from the Philippine landmass although it will enhance the habagat or southwest monsoon as it moves northwest over the East Philippine Sea.

Philippine Atmospheric Geophysical and Astronomical Services Administration (Pagasa) forecaster Fernando Cada said that as of 4 p.m. on Saturday, Henry was at 530 kilometers east of Guiuan, Eastern Samar, with maximum sustained winds of 120 kph and gusts of up to 150 kph, moving northwest at a speed of 19 kph.

No public storm warning signal has been raised over any part of the country as Henry will not make landfall.

But though it will not make landfall, it may draw nearer to the eastern part of the Visayas or the Bicol region before moving over the East Philippine Sea to Taiwan, Cada said.

He stressed that the typhoon may not have any direct effect on the country but may enhance the southwest monsoon by Monday or Tuesday and bring rain over parts of Luzon, particularly the north.

He explained that the rains over the western parts of Luzon, including Metro Manila, on Saturday were caused by Henry’s outer cloud bands pulling moisture from the West Philippine Sea towards Luzon.

According to Pagasa’s forecast for Sunday, Eastern Visayas will be cloudy with moderate to occasionally heavy rainshowers and thunderstorms while Metro Manila, Mindanao, the Bicol region, Cagayan Valley, the rest of the Visayas as well as the provinces of Aurora and Quezon will have cloudy skies with light to moderate rainshowers and thunderstorms.

The rest of the country will be partly cloudy to cloudy with isolated rainshowers and thunderstorms.

NDRRMC Executive Director Alexander Pama said the findings on the destruction caused by Glenda were based on the interagency postdisaster risk assessment (PDRA) conducted on Saturday with representatives from the different government agencies.

According to the NDRRMC, 27,874 houses were completely destroyed while 83,498 were partially damaged, most of them in the Calabarzon region.

Damage to infrastructure was estimated at more than P1.049 billion in Regions III, IV-A, IV-B, V, VIII and in Metro Manila, while more than P4.8 billion of rice, corn, high-value crops, livestock and agricultural facilities were damaged in the Cordillera Administrative Region, National Capital Region, Central Luzon, Mimaropa and Bicol.