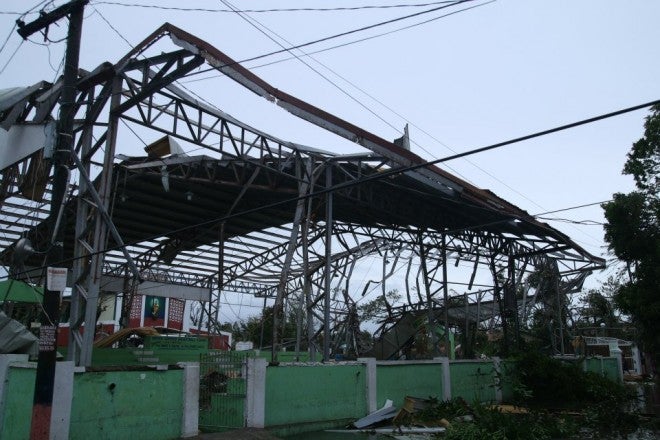 Unisan, one of Quezon province’ seaside municipalities, is among those hardest hit by Typhoon Glenda. What used to be the concrete-and-metal covered basketball court at the center of the poblacion is now reduced to skeletal frame-like wreckage. CONTRIBUTED PHOTO/JALEX DARCA LARONG

Disaster officials on Friday considered Quezon as the worst-hit by Typhoon “Glenda” (international name: Rammasun) in Calabarzon, with at least 10 persons killed and 75 others injured in the province that remained without power four days after the typhoon hit the region.

The Regional Disaster Risk Reduction and Management Council (RDRRMC) reported at least 43 casualties in Calabarzon (Region 4A) as of Friday morning, with 10 in Quezon, 11 in Laguna, 10 in Cavite, nine in Batangas and three in Rizal.

Most were killed by toppled trees, walls or posts and by drowning. 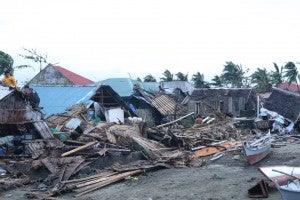 Residents try to rebuild what’s left of the destroyed houses on the shoreline of Unisan, Quezon, in the aftermath of Typhoon Glenda. CONTRIBUTED PHOTO/JALEX DARCA LARONG

Calabarzon RDRRMC director Vicente Tomazar said they are still waiting for reports from other provincial and municipal units whose communication lines were heavily damaged during the typhoon, which he said triggered flashfloods, landslides and storm surges beginning midnight of June 16.

At least 55,000 homes in Calabarzon alone were so far found to have been damaged either totally or partially by the typhoon, while many roads are still being cleared of toppled trees and posts.

As of Friday, power has not been fully restored in Batangas, Cavite, Laguna and Rizal provinces.

According to the NDRRMC, power transmission lines in Bicol were still out although no power generation facilities were reported destroyed in southern Luzon.

Around 96,740 families or 512,007 individuals are still staying at 1,158 evacuation centers in seven regions affected by the typhoon.

Social Welfare Secretary Dinky Soliman noted that some families have returned to their houses after being preemptively evacuated in coastal areas or danger zones.

“We expect some families to remain in the evacuation centers, especially those whose houses were heavily damaged,” Soliman said.

Meanwhile, the National Food Authority (NFA) has released almost 7,500 sacks of milled rice to Glenda victims but the agency lost at least 13,000 sacks that the typhoon rendered useless.

Friday, slow-moving Tropical Storm “Henry” entered the Philippine area of responsibility but no public storm warning signals were raised as the Philippine Atmospheric, Geophysical and Astronomical Services Administration said it will not affect any part of the country just yet.