Napoles happy, ‘Straight from the Heart’ 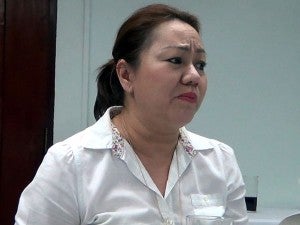 Or so claimed her lawyer, Stephen David, during an interview following Napoles’ arraignment for plunder charges on Friday with coaccused Sen. Juan Ponce Enrile and his former chief of staff Jessica Lucila “Gigi” Reyes.

“She has given up her life for the Lord, she has no more worries,” her lawyer said.  “She has placed all her trust [in] the Lord. She has already spoken but they did not listen,”  David added, referring to the tell-all affidavit that Napoles had submitted previously to the Department of Justice.

The lawyer said Napoles’ blood pressure recently dropped back to normal levels.  She was also seen having animated conversations with not only her lawyers and security escorts but also other people in the packed courtroom of the Sandiganbayan Third Division.

Napoles even agreed to have a selfie with the lawyers of her coaccused in the graft case, National Livelihood Development Corp. president Gondelina Amata.

The pork barrel scam suspect also put on some makeup for Friday’s hearing, although she wore the same blue hoodie, dark jeans, sneakers and dark glasses she had on in previous hearings.

David said his client wore the same blue hoodie to her appearances in court because she believes that the outfit brings her luck.

“She also gave me a [similar] hoodie,” he added.

Napoles also carried a brown bag that had a water jug and the prayer book, “Straight From the Heart,” at yesterday’s hearing.

“She is a prayerful woman,” David said.

Napoles had previously asked the Catholic Bishops’ Conference of the Philippine to take her into custody, a request immediately rejected by the group. Before her arrest, the scam suspect was a generous patron of the Catholic Church and some of its bishops and priests.