Japan to call for summit with China’s Xi at Apec 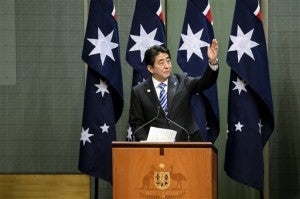 TOKYO—Japan yesterday called for summit talks between Prime Minister Shinzo Abe and Chinese President Xi Jinping during a regional meeting in Beijing later this year, as diplomatic tensions sour relations between the neighbors.

Japanese Chief Cabinet Secretary Yoshihide Suga, Abe’s right-hand man and the Japanese government’s top spokesperson, said it was “natural” for the two leaders to meet on the sidelines of the Asia-Pacific Economic Cooperation (Apec) forum, which is slated for November.

“At Apec, world leaders will convene. Having talks, I think, is a natural practice in the international community,” he told the Foreign Correspondents’ Club of Japan.

Tokyo and Beijing “have to share responsibility for peace and prosperity in the Asia Pacific and the international community,” he added.

Suga’s comments came as Tokyo and Beijing remain at loggerheads over ownership of islands in the East China Sea. Rising tensions have seen Chinese ships routinely sail into waters near the disputed archipelago while Japan has scrambled fighter jets to chase off intrusions near its airspace.

Despite a major trading relationship between the two countries, Abe and Xi, both strong nationalists, have not held a bilateral summit meeting since they both came to power in the last year and a half.

Tensions over the bitter memories of Japan’s militarism in the first half of the 20th century have also weighed on relations.  AFP

Obama: US will defend Japan vs China