MANILA, Philippines–Sen. Jinggoy Estrada and his alleged coconspirator Janet Lim-Napoles were a picture of contrasts during their three-hour-long arraignment for plunder and graft at the Sandiganbayan Fifth Division courtroom on Monday.

The two principals in the plunder and graft cases involving P183.79 million in alleged kickbacks from the senator’s pork barrel channeled to the businesswoman’s fake nongovernment organizations (NGOs) did not make even eye contact during the hearing.

Estrada was cool, calm and collected in his barong tagalog as he refused to enter a plea pending the resolution of two petitions pending in the Supreme Court to stop the Sandiganbayan from trying his case.

“Your Honors, on the advice of my lawyers, I respectfully refuse to enter a plea,” Estrada told the court, composed of Presiding Justice Samuel Martires and Associate Justices Alexander Gesmundo and Therese Estoesta.

The court entered a plea of not guilty on behalf of Estrada, the second of three senators to be arraigned in the P10-billion pork barrel scam case.

His wife, Precy, parents (Manila Mayor Joseph Estrada and former Sen. Loi Ejercito), and two siblings (Jackie and Jude) were behind him as he faced a second plunder charge in 13 years.

Loi and her children were chewing gum during the arraignment.

Estrada was standing during the entire proceedings and even advised one of his coaccused, Evelyn Sugcang of the National Livelihood Development Corp. (NLDC), to get a lawyer, as she came to court without a legal counsel.

She was a mixed bag of emotions during the hearing—chatty and expressive before the start of the proceedings as she bantered with her lawyer, but quiet and apparently nervous as her turn to be read the charges against her came.

Napoles was seated five rows behind Estrada and she consciously avoided any contact with the senator and his family to the point of avoiding the gaze of the former President even when she passed in front of the family to get near the court.

Estrada and Napoles were just shoulders apart during the arraignment but they never acknowledged each other’s presence.

Napoles’ mood turned glum after she pleaded not guilty, sitting with her shoulders slumped, looking forlornly at the floor while twiddling her thumbs during the rest of the proceedings.

Her lawyer, Stephen David, claimed she had a slight fever the night before and that was the reason she needed to sit during her arraignment. Her lawyer offered Estrada a seat beside Napoles, but the senator declined.

The most significant item discussed during the hearing was the subject of the senator’s name, as the prosecution had demanded that the defense submit official papers showing that Estrada had been allowed by the court to change his name from Jose Pimentel Ejercito to Jinggoy Estrada.

The senator’s lawyer, Jose Flaminiano, said his client had been using Jinggoy since he ran for vice mayor of San Juan City in 1988.

The justices advised the prosecution to use both names to refer to the same person in its case filings.

Two others accused in the plunder case—Estrada’s chief of staff Pauline Labayen and Napoles’ driver John Raymund de Asis—remain in hiding since the pork barrel scam was exposed 10 months ago.

In a handwritten statement he read after his arraignment, Estrada spoke out on what he called “cracks” in the Ombudsman’s case against him. 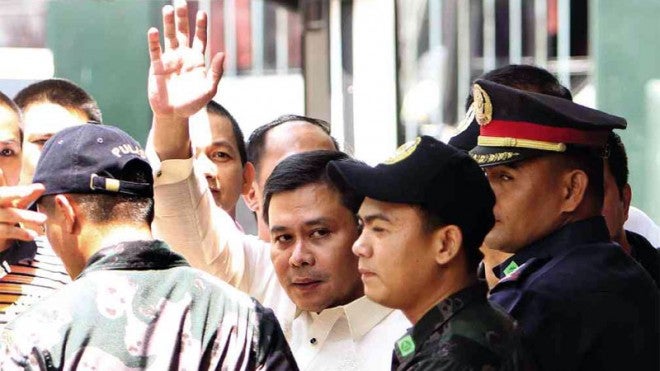 ARRAIGNMENT It’s Sen. Jinggoy Estrada’s turn to be arraigned on plunder and graft charges stemming from kickbacks he allegedly received from his pork barrel funds. The Sandiganbayan entered a plea of not guilty for him. Last week, another senator, Bong Revilla, was arraigned on a similar charge, while a third, Juan Ponce Enrile, has yet to face the court. Inset Estrada’s alleged co-conspirator Janet Lim-Napoles LYN RILLON

“The recent developments are indicative of the fact that the cases against us were rushed and railroaded and that due process of law was not observed, especially during the preliminary investigation by the Ombudsman. Because of its overzealousness to be glorified as heroes by putting us behind bars the Ombudsman haphazardly filed an information in the Sandiganbayan,” Estrada said.

He said the Ombudsman’s rejected plea to amend its information showed that the case was “politically motivated” because “they want to become popular and show the public that they can jail three senators.”

“If there are ‘truckloads of evidence’ against us and that the case is ‘airtight’ as they initially said, why is there a need to amend the information? If the case is truly solid and with plenty of evidence, they should’ve been able to write clearly and without any mistake the charges against us even with both eyes closed,” he said.

He was referring to the state prosecutors’ attempt last week to amend the plunder charges against him to show that he collected and not just received kickbacks from Napoles.

The prosecutors withdrew their motion to amend when the justices warned them that the amendment of the information would change the finding of probable cause against Estrada and lead to his being ordered released from jail.

David told reporters after the hearing that he would file a petition in the Supreme Court highlighting the inconsistencies in the plunder cases.

David said he was confident that the defense would show that the evidence against Napoles was weak as early as the preliminary conference.

He said his camp had withdrawn its motion to dismiss the case because the defense wanted the trial to proceed to see what the prosecution and its star witness, Benhur Luy, had to say.

“I doubt if they (prosecution) had read all the evidence they were using against us,” David said.

This early, David said he was seeing an early dismissal of the case against Napoles, who would invoke double jeopardy if the prosecutors insisted on putting her on trial again for the same offense as she was accused in the cases of Senators Bong Revilla and Juan Ponce Enrile.

“A person cannot be tried twice for a sin she committed only once. Under double jeopardy, there should be a valid information made; the case should have been heard in a competent court; the accused should have been arraigned; and the case dismissed. These conditions are present in this case. It happened with (former Justice Secretary Hernando) Nani Perez. There was no hearing in his case because there was a problem with the amendments the prosecution made,” David said, citing the failed bribery case against Hernandez involving Mark Jimenez in the early 2000s.

“Their resolution is flimsy and there is ground to question that in the Supreme Court,” David said.

Although he refused to divulge his defense strategy, David hinted that Napoles might surprise everybody by proving that there was no ghost delivery as alleged by the Ombudsman.”

“It’s also hard to prove conspiracy. There should be eyewitness testimony that you saw them talking or plotting together. It’s unthinkable that a senator would conspire with Napoles’ driver,” he said.

David said the Ombudsman should have realized that it has no chance of winning a plunder case, as it should have been more conservative and settled for graft or bribery charges.

“There, perhaps, they may have a chance,” he said.

Napoles pleads not guilty on 2nd count of plunder