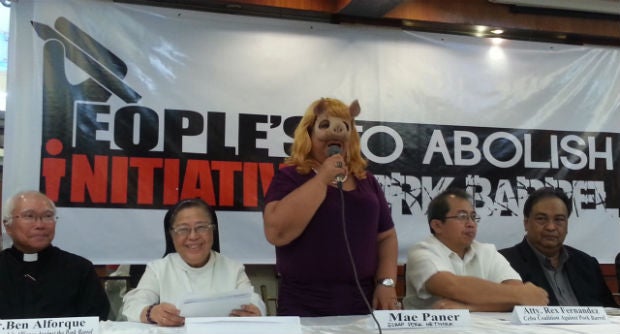 MANILA, Philippines–The antipork barrel movement is no longer confined to the streets.

After joining marches to protest pork barrel theft, “faceless” citizens should now level up and use the power of their pens to pass a law that will permanently ban the corruption-prone lump-sum fund from the national budget.

The People’s Initiative against Pork Barrel (PIAP), a national coalition of antipork groups, is seeking to pass a law through a people’s initiative that will make it a crime to insert pork barrel funds and other lump-sum items in the government’s spending plan.

The coalition will be spearheading efforts to gather some 5.4 million signatures for the proposed law.

“This is the chance for the faceless to participate in something that would truly change the system in our country. All you need is a ball pen and your signature, and the faceless can make laws. How so rock star is that?” antipork activist Mae Paner, popularly known as Juana Change, said at a press briefing.

A “people’s congress” will approve the final version of the people’s initiative bill and formally launch the signature-gathering campaign on Aug. 23 in Cebu City.

Once the Commission on Elections certifies that enough signatures have been gathered, it will have to schedule a referendum not later than 90 days. If the initiative gets the approval of the majority of the voters, it will become a law.

Mary John Mananzan said that despite the Supreme Court’s ruling declaring the Priority Development Assistance Fund (PDAF) unconstitutional, Congress created a new mechanism for handing out pork to members through a discreet referral system and recommendation.

The President’s own lump-sum funds are also intact, including the Social Fund, the Special Purpose Fund and the Malampaya Fund.

The Supreme Court has also been dragging its feet on its ruling on the Aquino administration’s Disbursement Acceleration Program, Mananzan said.

“The President, Congress and the Supreme Court have failed the people. It is time for the people to take matters into their own hands and abolish the pork barrel system themselves,” she said, reading the group’s statement.

The group’s proposed Pork Barrel Abolition Act seeks to prohibit the inclusion of pork barrel or lump-sum funds in the budget, save for calamity and intelligence or confidential funds. It will require that all proposed budgets contain line-item appropriations.

The bill proposes to abolish the President’s Social Fund and require all unspent, unobligated and unreleased funds to revert to the general fund by the end of the fiscal year.

Prohibited under the bill are budgetary provisions that allow postenactment intervention by any member of Congress in the implementation of the measure. Any such intervention will also be penalized.

The proposal will make it unlawful for any official to impound any appropriation by retention, reduction, deferral or suspension of release of funds, or by any other means.

Officials found violating its provisions will be punished with one to 10 years’ imprisonment and perpetual disqualification from public office.

Bayan Muna Rep. Neri Colmenares warned that officials were going to insert a lot of pork barrel funds in the 2015 budget because this is the year they will be preparing for the 2016 elections.

Fr. Ben Alforque of the Church People’s Alliance against the Pork Barrel said Church officials were participating in the fight not because of partisan politics but because of its moral dimension.

Part of the moral issue is patronage politics, where it appears as if politicians are the ones bestowing aid and the people owe him or her something when in truth, the assistance being given comes from the people’s money, Alforque said.

He said the service dimension of public office was being denied, with officials being looked at as powerful instead of being treated as public servants.

Manny Lopez of the group E-Pirma, a member of the coalition, said the people’s initiative was a “good opportunity for us to realize what our leaders have not been able to deliver.”

Marc Canton of the Cebu Coalition against the Pork Barrel System said the group was aiming to gather 15 percent of signatures of registered voters for the people’s initiative, or 5 percent more than what is required, so that there would be leeway in case of miscounts.

Rex Fernandez of the same group said the task would require funds and the coalition would try to ask for donations. Spending would be properly reported and documented, he said.

He estimated that P20 million would be needed for the printing of copies of the bill, the education drive and other logistical needs for the signature gathering.

Carol Araullo of Bagong Alyansang Makabayan said the people’s initiative was an uphill climb but members of the coalition behind it were eternal optimists.

Pork barrel out; no more NGOs