Pork barrel out; no more NGOs

“Let’s forget NGO. There will be no more NGOs,” Speaker Feliciano Belmonte Jr. said Friday, declaring an end to dealings between congressmen and nongovernment organizations in the financing of projects.

Answering questions from reporters after his announcement, Mr. Aquino said he was not threatened by next Monday’s rally against the Priority Development Assistance Fund (PDAF) or pork barrel.

“Why should we be worried? We’ve gained more allies in fixing the system. Thanks a lot to them,” Mr. Aquino said.

The President said he was scandalized by the Commission on Audit’s findings and he blamed it all on the administration of former President Gloria Macapagal-Arroyo, now a representative of Pampanga in the House.

With the abolition of the PDAF, Mr. Aquino said the executive and the two Houses of Congress would find a new way to deal with the needs of constituents “in a manner that is transparent, methodical and rational” and “not susceptible” to abuse.

From now on, the President said, lawmakers could identify and “suggest” projects in the congressional districts but these had to “go through the budgetary process.”

“If approved, these projects will be earmarked as line items, under the programs of your national government. In this way, they will be enacted into law as part of our national budget,” Mr. Aquino said.

But the projects should not include “consumable” soft projects, such as fertilizers, seeds, medicines, medical kits, dentures, funding for sports festivals, training materials, and other such items, he said.

And the funds can no longer be disbursed through NGOs and certain government-owned and controlled corporations (GOCCs), some of which had been used in the pork barrel scam, Mr. Aquino said.

Those GOCCs will be abolished, along with others of their kind that have become notorious for irregularities, and seem to serve no other purpose than being instruments of corruption, he said.

Funds for projects should be limited to the districts or sectors of the legislators who sponsored them, he said.

Speaking to reporters after President Aquino announced on national television his decision to abolish the PDAF, Belmonte called on members of the House to “graciously accept” the abolition and prepare to follow a new system of financing projects for their constituents.

President Aquino promised to reform the corruption-plagued PDAF a month after the INQUIRER began to publish a series of reports on how businesswoman Janet Lim-Napoles allegedly siphoned off P10-billion in pork into her bank accounts through bogus NGOs over the past 10 years.

The INQUIRER series was validated by a Commission on Audit (COA) special audit of the PDAF from 2007 to 2009, the results of which showed that 12 senators and 180 congressmen channeled P6.156 billion in pork through 82 NGOs.

Announcing the results of the audit on Aug. 16, COA Chair Grace Pulido-Tan said 10 of the NGOs were “linked to Janet Lim-Napoles.”

The confirmation of the INQUIRER reports stirred up public anger and calls for the abolition of the PDAF, including plans for  a Million People March to Rizal Park on Aug. 26 to demand the scrapping of the pork barrel.

After weeks of resisting those calls, President Aquino admitted on Friday that his own reforms did not stop the “scandalous” misuse of the PDAF.

“Despite the reforms we have implemented, we have seen, as the events of the past weeks have shown, that greater change is necessary to fight those who are determined to abuse the system. It is time to abolish the PDAF,” Mr. Aquino said.

The President directed Belmonte and Senate President Franklin Drilon, who flanked him as he spoke, to devise a “mechanism” by which the P25.24 billion allocated for the PDAF could be itemized in the P2.268-trillion proposed budget for 2014.

Through new mechanism, “every line, every peso, and every project” would be open to scrutiny, and the lawmakers’ constituents would get a “fair and equitable share” in the budget in the form of health services, scholarships, livelihood and infrastructure, Mr. Aquino said.

The new system appears to have been under discussion between Malacañang and the Senate and House leadership, as Belmonte was ready with answers to potential questions from the congressmen.

Belmonte advised the members of the House to begin constituency consultations and prepare a list of suggested projects that would be scrutinized during the deliberations on the budget in the House and the Senate.

“I call on the congressmen to begin listing down (projects), asking suggestions from your barangay captains, your mayors. Come up with a list of projects that you want to pursue,” Belmonte said. 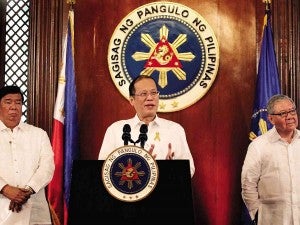 GAME-CHANGER It seemed President Aquino preempted the Million People March on Monday meant to register the people’s outrage against misuse of pork barrel when he announced its abolition. He earlier defended pork, saying it was helping the poor all over the country. Flanking him are Senate President Franklin Drilon and Speaker Feliciano Belmonte Jr. who have been tasked to devise a new mechanism to replace the irreversibly hated PDAF.MALACAÑANG PHOTO BUREAU

And items needed for the projects would be subject to “open and competitive bidding,” with all bid notices and awards to be posted on the Philippine Government Electronic Procurement System or PhilGEPS, Mr. Aquino said.

The President said he had directed Budget Secretary Florencio Abad to consult with Drilon and Belmonte in devising the new mechanism and submit it to him “as soon as possible.”

The abolition of the PDAF therefore will not take away from lawmakers the privilege of choosing projects and allocating funds for the development of those projects.

That explains the 180-degree turn by congressmen and senators yesterday from their opposition to the public call for the abolition of the PDAF.

Samar Rep. Mel Sarmiento of the Liberal Party said Mr. Aquino’s decision “speaks a lot about his determination to defy the conventions of business-as-usual politics and set in place all the needed reforms to defeat all forms of corruption in the government.”

Sarmiento added: “I fully support President Aquino’s decision to scrap the PDAF, especially with his assurance that all the people that we’ve been helping through the PDAF will not be left behind and our scholars will not be forced to stop going to school.”

Iloilo Rep. Jerry Treñas, another administration ally, described Mr. Aquino’s decision as “unprecedented,” and said it “would certainly help in ensuring transparency in the use of public funds.”

Buhay Rep. Lito Atienza, who earlier called for the suspension of the pork barrel, commended the President for his “sensitive decisiveness on the issue and heeding the people’s outrage.”

“It is wrong for legislators to appropriate funds which they themselves decide how to spend. The source of corruption is the discretionary nature of the pork barrel system as practiced,” Atienza said.

Senators from both the administration and the opposition coalitions also supported Mr. Aquino’s decision to abolish the PDAF.

“I’m quite happy and I thank President Aquino for his position that the pork barrel should be abolished and be replaced by line item budgeting wherein the use of public funds would be made more transparent,” Senate Majority Leader Alan Peter Cayetano said.

Cayetano and Sen. Francis Escudero, chair of the committee on finance that will soon hear the administration’s proposed budget for next year, have filed separate resolutions for the abolition of the PDAF.

“Good move in the name of continuing reforms in the government,” said administration Sen. Aquilino Pimentel III, chair of the committee on justice and human rights.

“Let’s prepare for a very thick and detailed national budget because there will be line item budgeting to reflect budget priorities at the national, district and sectoral levels,” Pimentel said.

“[I]f it must be scrapped, the pork barrel should be scrapped totally,” Sen. Juan Ponce Enrile said at a news conference on Friday.

“We should not only look at scrapping the PDAF, but [also abolishing] the various pork barrel or lump-sum appropriations of all departments of government,” said Enrile, one of the senators linked to the pork barrel scam allegedly masterminded by Napoles.

Sen. Gregorio Honasan, also linked to the pork scam, said the abolition of the PDAF was “a start but not the final solution.”

Honasan said he feared merely abolishing the pork barrel would just transfer the discretion over development and assistance projects and the potential for corruption from the legislative branch to the executive.

Can do without it

Sen. Jinggoy Estrada, another opposition coalition member linked to the pork scam, said he could do without the pork barrel.

“I welcome it,” Estrada said, reacting to President Aquino’s announcement.

But Estrada expressed apprehension about the loss of medical assistance the senators could provide for needy constituents.

“In my case, the queue for medical assistance is quite long,” he said.

“This issue has unnecessarily tarnished the legislature so much that the safeguards now proposed by the President is a very welcome development,” Revilla said.

“I’m glad that the President has made clear his position on the PDAF. I have been for the abolition and one with my fellow senators,” Marcos said.

But Melito Salazar, president of the Management Association of the Philippines, recommended that the new mechanism for financing congressional projects be made open to public scrutiny.

Salazar said the public was angry not just over the PDAF but also over the corruption that came with the use of the pork barrel during the Arroyo administration.

Miguel Varela, president of the Philippine Chamber of Commerce and Industry (PCCI), also lauded the President’s decision, but said businessmen expected the government to lay down guidelines for appropriations and fund releases.

Former National Treasurer Leonor Briones, professor emeritus at the University of the Philippines-National College of Public Administration and Governance, described Mr. Aquino’s decision to abolish the PDAF as a “small victory” that should not lull Filipinos into giving up protests against lump-sum appropriations in the budget. With reports from Norman Bordadora and Amy R. Remo