Enrile goes to SC for details of charges 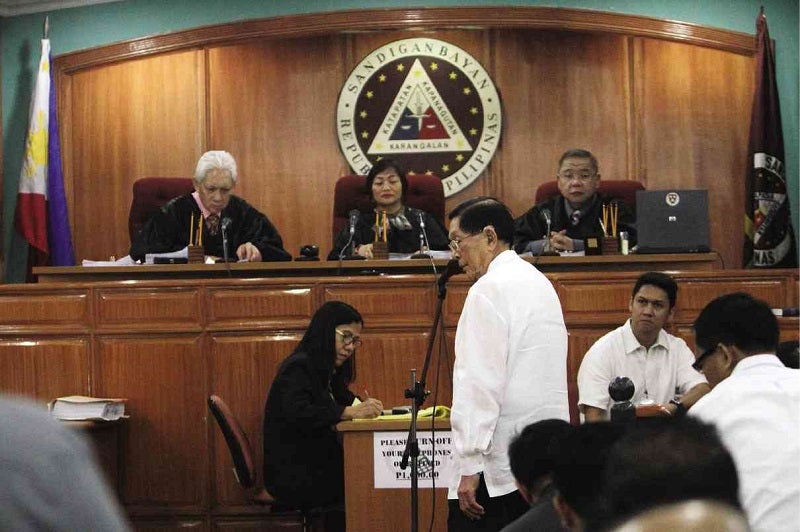 The high-powered legal team of Sen. Juan Ponce Enrile will go to the Supreme Court to force the prosecution and the Sandiganbayan to spell out his involvement in the P10-billion pork barrel scam.

But because the court denied his motion to be shown evidence of his alleged guilt, Enrile refused to enter a plea during his arraignment on plunder and graft charges on Friday.

The court, however, entered a not-guilty plea for the 90-year-old Enrile, who has been detained at the Philippine National Police General Hospital in Camp Crame, Quezon City, since his surrender after being ordered arrested by the court on July 4.

Lead defense lawyer Estelito Mendoza, a former solicitor general, said he was shocked at how quickly the court rejected his “expressive and forceful” arguments for Enrile’s right to be shown evidence that he accepted millions of pesos in kicbacks from Napoles.

In an interview after the hearing, Mendoza’s colead counsel Eleazar B. Reyes said the defense would go to the Supreme Court because Enrile’s right to be informed of the charges against him was a legal issue that needed to be resolved.

Reyes, a founding partner of Enrile’s Pecabar law office, said the defense was caught off-guard by the swiftness of the Sandiganbayan’s decision.

“We were surprised, we thought that at least they would talk about it,” Reyes said.

“There is a Latin term, res ipsa loquitur, the proceedings speak for themselves. I don’t understand these proceedings,” Mendoza said, citing not only the speedy rulings but also the short deadlines given to the defense to file responses to the prosecution’s moves.

Mendoza said it was the right of any accused to know what exactly he was being accused of—who gave him the kickbacks, how much, where and when he received money.

He demanded that the Ombudsman identify the unnamed individuals collectively referred to as “others” in the charges against Enrile.

Mendoza said that with all of the whistle-blowers under its wings, the Ombudsman had the “flexibility” to plug the holes in its complaint against Enrile.

“In poker, the basic rule is to keep your cards close to your chest, the key to winning is to bluff your way [through]. But that is not the way in criminal proceedings. All cards should be on the table. There should be no bluffs. [The] proceedings will not be fair if we don’t agree on the basis of the charges,” Mendoza said. “What is at stake is his life what is at stake is his honor. This cannot be casually dealt with.”

During the hearing, Mendoza challenged the Ombudsman prosecutors—Annielyn Medes Cabelis, Maria Janina J. Hidalgo, Jennifer A. Agustin and Edwin B. Gomez—to show the court in one hour at least one piece of evidence that Enrile received kickbacks from his disbursements from the Priority Development Assistance Fund (PDAF).

Mendoza said that the prosecution stayed “mute” as he made his challenge, prompted Associate Justice Samuel R. Martires to ask the prosecutors before a break in the hearing: “Will you really remain silent?”

In reply, the state prosecutors said Mendoza’s plea was part of Enrile’s “dilatory tactics” and a reiteration of the issues raised in his case against his warrant of arrest and his petition for bail.

Enrile looked a bit pale but otherwise fine as he sat at the front row of the courtroom.

He wore a white barong that was two sizes larger to fit a heart monitor attached to his body.

A police doctor, who accompanied Enrile to court, declared him fit to go on arraignment although she had to look back at the senator for confirmation before stating her prognosis.

Unlike Senators Jinggoy Estrada and Bong Revilla who were surrounded by close family members during their separate arraignments, Enrile was accompanied only by his lawyers.

Enrile joined the huddles of Mendoza and Reyes during the hearing. He also had a lengthy conversation with Anacleto Diaz, the lawyer of his coaccused and former chief of staff Jessica Lucila “Gigi” Reyes who sat beside him during the hearing.

Reyes, confined at Taguig Pateros District Hospital, was unable to make it to her arraignment because her doctors did not clear her for travel to the court.

Insp. Aris Villaestre, spokesperson for the Bureau of Jail Management and Penology, said Reyes lacked appetite and was still on intravenous fluid therapy.

“She was not cleared to go out of the hospital, as her condition was still unstable,” Villaestre said.

Reyes was taken to the hospital on Thursday morning after she had a “panic attack,” which caused a surge in her blood pressure.

She surrendered at the Sandiganbayan after being ordered arrested on July 4, and was held in the court’s detention cell until she was ordered transferred to a police jail in Camp Bagong Diwa, Taguig City, where the suspected communist rebels were being held.

Diaz said fear of those detainees made Reyes anxious about her safety and sent her blood pressure up.

Reyes asked the Sandiganbayan through her lawyers to allow her transfer to a tertiary hospital while in detention.

She said her cardiologist at Taguig Pateros District Hospital on Friday recommended that she be transferred to a better hospital for further tests.

As of last night, Reyes was transferred to the Heart Center in Quezon City.

Napoles’ lawyer Stephen David said the defense allowed the arraignment to proceed, as it would prevent the prosecution from amending what he called “weak” charges against her. With reports from Maricar B. Brizuela and Dona Z. Pazzibugan