MANILA, Philippines—Senator Juan Ponce Enrile on Thursday asked the Sandiganbayan to defer his arraignment on the plunder case in connection with the pork barrel scam.

In his 4-page motion, Enrile, through counsel Estelito Mendoza, said he filed a Motion for Bill of Particulars where he sought clarifications on the charge sheet for plunder to enable him to “plead and prepare for trial.”

He said once arraigned, he will no longer have any right to object to any defect on the charge sheet or Information for plunder.

In his Motion for Bill of Particulars, Enrile said in the Information, it stated that he, Atty. Jessica Lucila Reyes, Janet Lim Napoles, Ronald John Lim and John Raymund De Asis “did then and there willfully, unlawfully and criminally amass, accumulate and or acquire ill-gotten wealth amounting to P172 million through a series of overt act.” 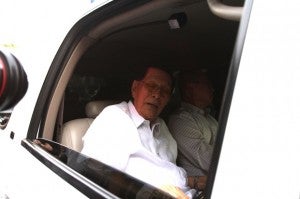 He asked that they be clarified of the following:

The Information further stated that “by repeatedly receiving from Napoles and/or her representatives kickbacks, commissions before, during and/or after the project identification, Napoles gave Enrile and/or Reyes received, a percentage of the cost of a project to be funded from Enrile’s PDAF’…”

They also asked that they be clarified of the following:

* What was ‘repeatedly’ received? If amounts of money, the amount and if on several occasions, state the date, amount and place where it was given;

* Name of the specific person who delivered, who received the amount and how much;

* The circumstances during before and/or after the project identification, name and nature of the project and where was it located;

* The law indicating a portion of Enrile’s PDAF and amount per year;

* In describing the said projects as fictitious, what is the basis?

* How Enrile took advantage of his position and why?

“A trial cannot be fair unless there is a common understanding among the judge who presides, the prosecution and the defense as to the alleged acts committed by the accused which constitute the offense. Nor can the defense adequately prepare for trial,” the motion for Bill of Particulars stated.

The motion added that the prosecution submitted thousands of documents therefore it will not be difficult for them to answer the matters that they want clarified.

Enrile’s camp also wanted the deferment of the arraignment due to the health condition of the 90 year old senator.

On Thursday afternoon, doctors from the Philippine General Hospital were scheduled to monitor to Enrile’s heart activity.

The Sandiganbayan, however, has not deferred the arraignment. Instead, set this motion for hearing Friday morning.

PNP defended on decision to confine Enrile in hospital

Read Next
Justice Ong on guilty report: ‘Untruthful and misleading’
EDITORS' PICK
Look Through: The fate of impounded stray dogs
House energy committee chair Arroyo bats for cheap electricity
What to watch out for when selecting a video surveillance solution
23,000 cops to be deployed nationwide for school reopening
Unleash the photographer in you this World Photography Day with vivo smartphones
DOH says COVID-19 cases plateauing, but public shouldn’t be ‘complacent’
MOST READ
Korina Sanchez reunites with former ABS-CBN co-anchors Julius Babao, Cheryl Cosim
Solons file resolutions seeking probe on ABS-CBN, TV5 merger
Light therapy could be the answer to your sleep problems
Sharon Cuneta asks for prayers for friend in ICU who suffered silent stroke
Don't miss out on the latest news and information.