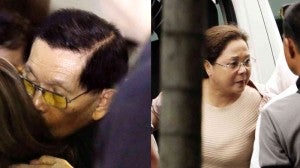 MANILA, Philippines–Sen. Juan Ponce Enrile and his former chief of staff, Jessica “Gigi” Reyes, who are both indicted for plunder and graft, want to be detained at the Philippine National Police headquarters in Camp Crame. But in separate facilities.

Enrile and Reyes gave their separate petitions to the Sandiganbayan Monday morning, asking the antigraft court to order the transfer of their place of detention to Camp Crame for the duration of their plunder trial.

Reyes asked the Sandiganbayan Third Division to hold a court hearing on Tuesday before it decides on her petition.

Enrile and Reyes, along with alleged scam mastermind Janet Lim-Napoles, her nephew Ronald John Lim and driver-bodyguard John Raymund de Asis, were charged with plunder for allegedly amassing P174 million in kickbacks out of pork barrel funds that were channeled to Napoles’ bogus nongovernment organizations.

Enrile and Reyes turned themselves in at Camp Crame and the Sandiganbayan, respectively, on July 4 to preempt their forcible arrest after the court issued warrants for their arrest.

On Monday morning, the 90-year-old Enrile asked the antigraft court to place him under “hospital detention” temporarily at the PNP General Hospital in Camp Crame in consideration of his “advanced age and frail medical condition.”

Enrile also asked that the administrator of the PNP General Hospital be allowed to decide based on his professional medical judgment whether he needed to be transferred to a better-staffed and better-equipped hospital “in case of emergency or necessity,” and then return him afterward to Camp Crame.

Although he was supposed to be confined at the PNP Custodial Center with coaccused Senators Jinggoy Estrada and Bong Revilla and a member of Revilla’s staff, Richard Cambe, Enrile was temporarily confined at the PNP General Hospital in consideration of his physical condition.

Enrile on Monday also reiterated his petition to be allowed to post bail.

In a separate petition filed Monday morning, Reyes asked the court to order her transfer to the PNP Custodial Center in Camp Crame, also in Quezon City.

She has been detained at the Sandiganbayan basement detention cell since Friday.

The Sandiganbayan Third Division has ordered Reyes temporarily held at the Sandiganbayan while waiting for the assurance of the jail warden of the Bureau of Jail Management and Penology (BJMP) facility in Quezon City that he can ensure Reyes’ “safety and security” while in detention.

Reyes said the PNP Custodial Center, unlike the Quezon City Jail, has the facility and means to secure her.

She cited the report given by the jail warden on July 5 that the Quezon City Jail “has no adequate facility and means to handle and ensure the safety and security of detainees in high-profile cases” such as herself.

Reyes also pointed out that if she were detained at the PNP Custodial Center with her coaccused, “there will be less logistical and security concerns and inconvenience” for the PNP.

On the scheduled date of her transfer from the Sandiganbayan, the BJMP said Reyes’ “high-profile” status could further strain the security of the congested and undermanned Quezon City dormitory for female detainees in Camp Karingal.

At a press conference Monday afternoon outside the gated female dormitory compound, the BJMP-National Capital Region spokesman, Insp. Aris Villaester, reiterated the BJMP’s manifestation to the Sandiganbayan over the weekend that there was no room for Reyes in the Quezon City Jail.

“[The Quezon City female dormitory] is 800-percent congested: The ideal capacity of the dorm is 56, but the actual number of detainees here is 504,” Villaester said.

“Some [detainees] sleep on the floor because there are not enough bunk beds. They’re cramped inside,” Villaester said.

Based on the BJMP’s statement, Reyes’ camp asked the Sandiganbayan on Monday that it change her place of detention to the PNP Custodial Center.

The PNP is preparing a cell for Reyes should the Sandiganbayan order her detention at the PNP Custodial Center.

Although the court has not yet issued a commitment order, the PNP is setting aside a cell at the female ward.

“We will have to find space for her,” PNP spokesperson Chief Supt. Reuben Theodore Sindac said at a press briefing.

She will be held at a female ward in a detention cell for one, with female guards securing her, Sindac said.

Villaester noted that high-profile detainees like Reyes would be an “added” load on jail guards, because they attract a greater “bulk of visitors” and would require more escorts when they attend hearings.

“A high-profile inmate needs higher levels of security. This facility is not designed for that. We are recommending [the BJMP jail annexes] in Bicutan, where other high-profile, high-risk detainees like the Ampatuans are being held,” Villaester said.

Villaester said the BJMP was not refusing to take in Reyes should the Sandiganbayan order that she be held at the Quezon City Jail.

“We won’t refuse anyone, whoever they are, whatever their level in society. Whatever the court will order, we cannot do otherwise. We’ll find a way [to accommodate Reyes],” he said.

Rocamora added that should Reyes be brought to the Quezon City Jail, she would join the others in the dormitories. “She will also have to sleep on the floor, as we have no available bunk bed for her.”

Rocamora described the dormitory as a 263-square-meter space on the second floor, divided into two areas, lined with bunk beds.

Detainees in the dorm are usually being held for theft, illegal drugs cases, homicide, estafa and illegal recruitment.

An isolated cell is available but is currently occupied by detainees with tuberculosis, Rocamora said.

At the press briefing in Camp Crame, Sindac said the PNP had coordinated with Reyes, advising her to turn herself in to the Criminal Investigation and Detection Group.

Reyes heeded the advice of her counsels and went to the Sandiganbayan on Friday.

“We were still waiting for the instance that she might be [sent] here, but she stayed put at the Sandiganbayan over the weekend,” Sindac said.

“The new schedule is not just for the two senators but for all the more than 75 detainees. This is also an independent action and is not related to what happened a weekend ago. It was planned but we had to study the security considerations very well,” Sindac pointed out.

The PNP spokesman was referring to the violations of regulations committed by visitors of Revilla and Estrada.

The alleged overstaying and partying inside the custodial center led to the sacking of the facility’s warden last week.

Source: Gigi Reyes says she doesn’t mind being in same jail with Enrile

Who says Gigi Reyes is sweating at her detention room?