Deletion of files is probably ‘inadvertent’
By: Nancy C. Carvajal - @inquirerdotnet
Philippine Daily Inquirer / 12:57 AM May 31, 2014 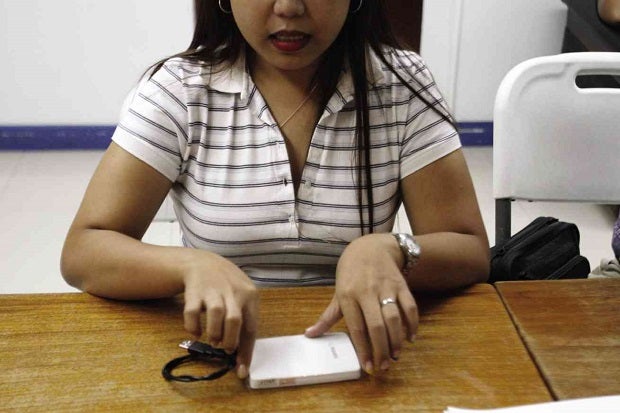 “The properties of the files that would show when they were created and last accessed or modified would show that the credibility of the [files on the external] hard drive is intact,” Baligod told the Inquirer in a telephone interview.

Luy gave the files to the National Bureau of Investigation, which in turn brought plunder and graft charges against Janet Lim-Napoles, Senators Juan Ponce Enrile, Jinggoy Estrada and Ramon Revilla Jr. and more than 30 former members of the House of Representatives and former government officials.

On Wednesday, the NBI gave a copy of Luy’s files to the Senate blue ribbon committee, which had investigated the pork barrel scam.

The NBI said some entries had been deleted from the files, but the agency retrieved and included these in the copy it gave to the blue ribbon committee.

Asked about it, Baligod could not say who deleted the entries from Luy’s files.

He said that if it was true that entries had been deleted from the files, the deletion could have been “inadvertent.”

“It could be me, Benhur or the NBI, in the process of summarizing the contents of the voluminous files,” Baligod said.

He said it was impossible that someone deleted those files expecting them never to be retrieved.

“Anyone who has a knowledge of computers knows that even if you delete a file, particularly in this case, it will remain there and can be retrieved by a special software,” Baligod said.  “If files were really deleted, it was just carelessness.”

Baligod said the deleted entries did “not have evidentiary value because they were templates of request letters, memorandums of agreement, songs and others.”

Malacañang was not shaken by the mention of Ochoa’s name. Communications Secretary Herminio Coloma said yesterday the unsigned draft letters addressed to lawmakers and to Ochoa “could hardly be considered having any probative value.”

It was Baligod who gave the hard drive to the Inquirer during a visit to the newspaper on April 27, 2013. He was accompanied by Luy’s parents, siblings and other whistle-blowers, and they asked for help in exposing the pork barrel scam allegedly masterminded by businesswoman Napoles.

The contents of the hard drive became the basis of a 13-part series of reports published by the Inquirer two weeks ago, detailing Napoles’ alleged transactions with lawmakers and government officials that sucked P10 billion from the Priority Development Assistance Fund (PDAF) over a period of 10 years.

Coloma called the public’s attention to the Ombudsman’s impending final resolution of the complaints for plunder and graft against Napoles, the three senators and their coaccused.

On April 1, the Ombudsman resolved that there was sufficient evidence to indict the accused and gave them 60 days to bring motions for reconsideration.

Coloma said the 60-day period within which the Ombudsman should resolve the motions would end on June 1.

Ombudsman Conchita Carpio Morales is returning from a study trip to the United States on June 2.

“We should expect an announcement from the Office of the Ombudsman on their action on the motions for reconsideration,” Coloma said. “In the event they throw out the motions, the next legal step will be the filing of information in the Sandiganbayan.”

“If the important files like the daily transaction records and disbursements were deleted then it would be suspicious,” Baligod said.

The Inquirer deferred the publication of the names of more than 100 local officials and the letters of requests because of the voluminous materials.

It was also next to impossible to distinguish between those who were merely used by Napoles from those who allegedly benefited from her operations.

Luy through his new lawyer, Raji Mendoza, earlier confirmed the existence of his external hard drive used by the Inquirer.

When asked by the Inquirer for comment on who could have deleted entries from the files, Mendoza said by SMS that Luy would answer all questions “in the proper forum.”

“The HDD contains information that is subject of an ongoing fact-finding investigation in the Office of the Ombudsman, hence, confidential. We can neither confirm nor deny the alleged deleted files. Benhur will address the issues in a court of law in due time.” Mendoza said.

According the report of the NBI Cybercrime Division to the Senate blue ribbon committee,  Luy’s hard drive was last accessed on Jan. 24, 2014.

The report said the hard drive was subjected to forensic examination on Jan. 30, 2014, using Encase computer forensic software, a tool that could recover files deleted from a computer.

An IT specialist of the Inquirer said the only way to delete files beyond retrieval “would be to break or damage the disk, submerge it in water and plug it in, or reformat the disk.”

The Inquirer copied the digital files of Luy from the hard drive provided by Baligod and used the contents as basis for its 13-part series.

A random search by an Inquirer IT specialist found the deleted files, which appeared in the Inquirer’s reproduction of the contents of Luy’s hard drive.

Earlier, Baligod confirmed that the Inquirer copied the contents of the hard drive.

“PDI was intentionally allowed to duplicate those files to make it (PDI) a neutral repository of the same, and to have a warranty against any unforeseen circumstance that may affect their contents,” Baligod said. With a report from TJ Burgonio