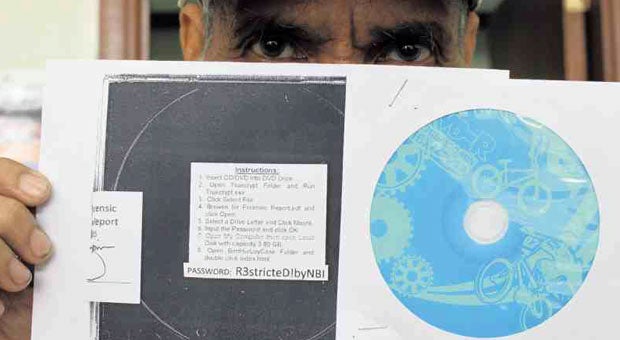 COPY FOR THE SENATE An aide shows a compact disc containing a copy of Benhur Luy’s files submitted by the National Bureau of Investigation to the Senate blue ribbon committee on Wednesday. JOAN BONDOC

MANILA, Philippines—As far as the Senate’s copy of Benhur Luy’s files is concerned, it’s a mumbo jumbo of the whistle-blower’s records of transactions with lawmakers, his music, photos and downloads, and only he could make sense of them.

The Senate’s copy of Luy’s digital files, which was submitted by the National Bureau of Investigation to the chamber on Wednesday, included items that the pork barrel scam whistle-blower or anybody who accessed his computer deleted before they ended up in the hands of authorities.

Ronald Aguto, chief of the NBI Anti-Cybercrime Division, said the agency could not say who deleted the files.

“We don’t know because when the hard drive was given to us, we just examined it. During the examination, the software was able to detect some deleted files and we were able to recover it,” he told reporters on Wednesday in the Senate.

Save for Bigboy, these are familiar code names that had been tossed around in the Senate inquiry into the P10-billion pork barrel scam that has riveted the country for months since the scandal broke in mid-2013.

Tuason, who confessed to brokering deals between Napoles and lawmakers, however, replied that she was only familiar with “Tanda,” “Sexy” and “Pogi” because she dealt with them personally.

She was apparently referring to Enrile, Jinggoy Estrada and Bong Revilla.

Most of the senators whose names are mentioned in the Senate’s copy of Luy’s files and Napoles’ expanded affidavit have flatly denied either knowing or transacting with Napoles.

The entries had dates when they were last accessed, first created and last written. If you click on the entries, they’re inactive precisely because their contents had been deleted.

NBI Director Virgilio Mendez handed over a CD of Luy’s files to Sen. Teofisto Guingona III, chair of the Senate blue ribbon committee on Wednesday. These are the official files, Guingona said.

The Inquirer ran a series of investigative stories on Luy’s digital files that were turned over to the newspaper by his family in April last year.

A copy of the files was submitted early this year as evidence to the Office of the Ombudsman, which on April 1 resolved that there was sufficient evidence to indict Estrada, Enrile and Revilla, Napoles and several others for plunder and graft over the scam.

If printed, the files could run up to 31,700 plus pages and could fill a whole room, Guingona said.

The rest of the deleted entries were straightforward: They carried the names Enrile, Marcos, Legarda, Estrada, Sotto and those of House representatives, among others.

The deleted files included Luy’s own music, including songs with such titles “Eli Eli Sabactani (My God, My God, why have You forsaken me?) and “The Lord announces good news;” his pictures, and even downloads apparently from an adult site. 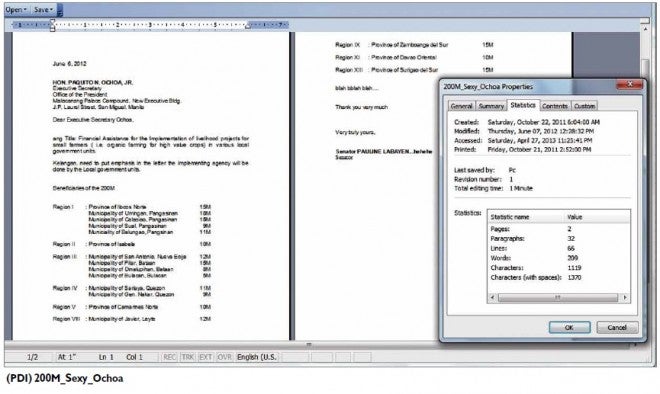