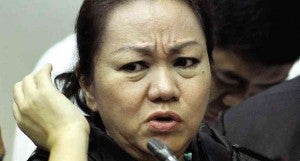 In her unsigned draft affidavit  submitted  to the  Senate blue ribbon committee Tuesday,  Napoles claimed that she  personally handed   P8 million commissions to Revilla at his residence in Ayala Alabang, Muntinlupa in January 2009 and  P13,337,500 to Estrada at  his office  in San Juan, also in 2009.

“In January 2009, I was invited for lunch by Senator Revilla in his (residence in) Ayala Alabang, Muntinlupa,” said Napoles, the alleged “pork barrel” scam mastermind.

“After eating, we talked alone in the dining room and I handed him a big paper bag containing P8 million as full payment for the listing. After a little small talk, I left since I had another meeting to attend to,” she said.

The amount supposedly represents Revilla’s share involving a P20-million deal that he had allegedly struck with Napoles.

Sometime in May 2009, Napoles said, Revilla called and told her that his chief of staff, Richard Cambe, would pick up their commissions in her office.

“I prepared the cash and placed P17 million in a computer box and prepared a bag containing P2,125,000 for Atty. Cambe. I personally gave the box and paper bag to Atty. Cambe and confirmed with Senator Revilla over the phone before he left,” she said.

The P17 million cash for Revilla was just half of the total P34 million commissions that he allegedly received from Napoles for an P85 million transaction.

Napoles said she also personally handed commissions to Estrada in the latter’s office in  San Juan .

She said her meeting with Estrada came a week after  his staff member, Pauline Labayen, invited her to dinner at L’Opera at the Fort Strip in Bonifacio Global City sometime in October 2009.

During that dinner, Napoles said Labayen showed her a special allotment release order (Saro) worth P50 million and “gave the terms of 60 percent, broken down as 55 percent for Senator Estrada and 5 percent for her.”

She said Labayen also insisted that the full payment be given already since the Saro was already released.

“After I said yes, she told me to deliver the same at ‘Tips and  Toes,’ [at] Wilson Street [in] Greenhills, which she owned. I placed the cash in two small sized balikbayan boxes which contained P27,500,000 for the senator and P2.5 million for her and proceeded to [the] parlor,”  Napoles said in her affidavit.

A week after she met with Labayen, Napoles said she received another call from her.

“She told me that Senator Estrada wanted to talk to me and I did. When I talked to him, he told me that he [was] expecting a project worth P24, 250,000 and offered the project to me. He instructed me to bring the agreed amount at his office in 82 Lt. Artiaga San Juan the next evening so we could also meet in person,” Napoles said.

“The next night, I prepared P13,337,500, the amount he insisted, and placed it in a box. I went to his office and met the Senator in person. When I handed the box to him, he instructed one of his staff to put it in his office at the ground floor. I did not stay long in his office because I was tired that day,” she added.

Aside from Labayen, Napoles said Ruby Tuazon also acted as an agent for Estrada.

Unlike with Revilla and Estrada, Napoles made no mention that she had personally met with Senator Juan Ponce Enrile.

Napoles said Tuazon, and Enrile’s former chief of staff, Atty. Jessica Lucila “Gigi” Reyes, were allegedly the ones who picked up the senator’s commissions from her.

Revilla, Estrada, and Enrile are among those facing plunder and graft charges in connection with the “pork” scam.  They allegedly got around P100 million commissions each based on Napoles’ draft affidavit.

Tuazon was also initially included in the charges but the Office of the Ombudsman decided to grant her request to become a government witness.

How much kickback did Enrile, Revilla, Estrada, et al. receive?