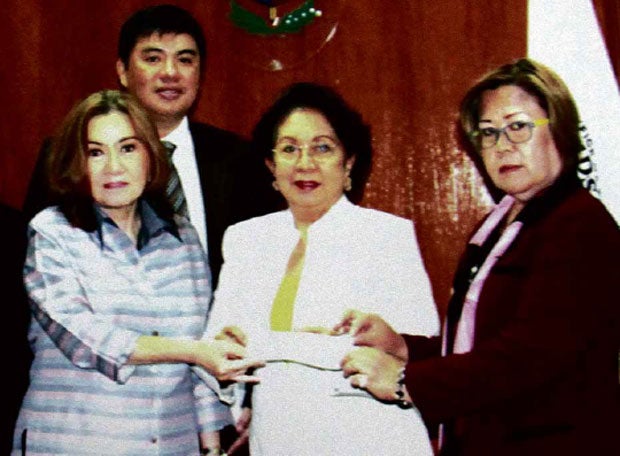 HIDDENWEALTH EXPOSED Ruby Tuason turns over amanager’s check for P40 million to Ombudsman Conchita Carpio Morales and Justice Secretary Leila de Lima representing her commissions, she says, from alleged pork barrel scam mastermind Janet Lim-Napoles. She is reportedly scheduled to leave for the US again. Behind them is Tuason’s lawyer, DennisManalo. OFFICE OF THE OMBUDSMAN

MANILA, Philippines—Socialite Ruby Tuason’s returning P40 million in commissions from the P10-billion pork barrel scam is not the main reason for granting her immunity from prosecution, the Office of the Ombudsman said on Friday.

Assistant Ombudsman Asryman Rafanan, speaking at a news conference, said the main consideration for the grant of immunity was Tuason’s “personal knowledge” of the involvement of Senators Jinggoy Estrada and Juan Ponce Enrile in the misuse of the Priority Development Assistance Fund (PDAF) allegedly engineered by businesswoman Janet Lim-Napoles.

But she is not completely free from prosecution, as she is also one of the accused in the P900-million Malampaya Fund scam also allegedly masterminded by Napoles.

“She has not been extended immunity in Malampaya because the case is still being evaluated,” Justice Secretary Leila de Lima told reporters on Friday.

“Tuason’s immunity from the PDAF cases does not automatically cover the Malampaya case,” she said.

De Lima said the Malampaya case had not reached the preliminary investigation stage. “Theoretically, she can still be liable for that case,” she said.

Ombudsman officials said Tuason herself determined how much to return to the government.

The P40 million that Tuason handed to Ombudsman Conchita Carpio Morales on Friday in the form of a manager’s check in the name of the Republic of the Philippines supposedly represented her 5-percent commission from every transaction Napoles had with Estrada and Enrile, the former Senate president through his chief of staff, lawyer Jessica Lucila “Gigi” Reyes.

According to the records and testimony of Benhur Luy, the principal witness in the pork barrel scam case, Tuason earned P35 million in commissions from Napoles.

The Ombudsman has found Napoles, Estrada, Enrile, Sen. Ramon Revilla Jr. and more than 30 other former lawmakers and government officials liable for plunder for the misuse of the PDAF, a pork barrel that channels funds to congressional districts.

Rafanan said Ombudsman investigators took Tuason’s word that P40 million was all she gained from the scam, adding that they saw no need to verify the figure and get proof that she declared the right amount.

“There’s no need because the P40 million amount was admitted by Tuason herself and computed by herself as 5 percent of the total amount,” Rafanan said.

He said the special Ombudsman panel investigating the pork barrel case decided that Tuason’s testimony was “necessary” in the prosecution.

“The return of the amount was due to the admission of Tuason herself. It was not one of the major considerations behind the decision [to grant her immunity],” Rafanan insisted.

“It so happened that she volunteered to return the amount, and we could not reject the offer,” he added.

Tuason, accompanied by her lawyer Dennis Manalo, turned over a check for P40 million to Morales and De Lima, as shown in a photograph released by the Office of the Ombudsman.

Under the deal, Tuason would be dropped from the list of the accused should the Ombudsman decide to send the case to trial in the antigraft court Sandiganbayan.

The Ombudsman is still evaluating the appeal filed by several of the accused.

Tuason has to “testify on her personal knowledge” and “produce documents in her possession” on the details of the alleged misuse of the pork barrel, Rafanan said.

“She has direct knowledge of the transactions and her statements dovetailed with other evidence available,” he said.

If she fails to fulfill her part of the agreement, Tuason will be reinstated as an accused, he said.

Tuason, a former social secretary to Estrada’s father, former President Joseph Estrada who is now mayor of Manila, fled to the United States after the National Bureau of Investigation’s probe of the pork barrel scam hit the news in July last year.

She returned in February, claiming pangs of conscience and offering to tell all she knew about the scam and to return her earnings from Napoles’ alleged racket.

Later in February, Tuason testified before the Senate blue ribbon committee, saying she delivered millions of pesos to Estrada in his office at the Senate and to Reyes at posh restaurants.

She also promised that she would sell her properties in the United States to raise the P40 million she needed to return her commissions from Napoles’ alleged transactions with the senators.

The Ombudsman appears to be not interested to learn where Tuason got the P40 million.

“It’s up to her. The only thing to remember is she was able to produce and return the amount,” Rafanan said.

De Lima said the P40 million returned by Tuason would go back to the national treasury and would become part of the government’s savings.

Luy and the other whistleblowers in the pork barrel scam welcomed the grant of immunity to Tuason.

“The testimony of Ms. Tuason will bolster the material points of our witnesses’ testimonies, particularly describing essential facts that she personally experienced, such as the giving of kickbacks to the lawmakers or their representatives,” Raji Mendoza, a lawyer for the whistle-blowers, said.

“Tuason’s testimony underlines the established fact that [Napoles] has been dealing with the offices of the lawmakers named by Tuason,” Mendoza added.

Lawyer Levito Baligod, another lawyer for the whistle-blowers and a complainant in the case, cheered the Ombudsman’s acceptance of Tuason as a state witness.

Stephen Cascollan, another lawyer for whistle-blowers in the case, said his clients were not questioning the grant of immunity to Tuason, but they were disappointed over the haste with which the Ombudsman gave her immunity.

“We are disappointed over the priority given to Ms. Tuason. We do not question the wisdom in granting her immunity, but we are surprised that such action was taken by the Ombudsman considering that three written requests for immunity pending for almost a year for three whistle-blowers were never even replied to,” Cascollan said.

The three who have applied to the Ombudsman as state witnesses are former Technology Resource Center head Dennis Cunanan and Rhodora Mendoza and Victor Cacal of the National Agribusiness Corp.

The Department of Justice has from the start taken in as state witnesses three former aides of Napoles who have admitted to being part of the scam: Luy, Suñas and Gertrudes Luy.

Napoles has not applied as state witness, although she brought a motion for reconsideration questioning the Ombudsman’s decision to indict her.

Her motion does not include a copy of an affidavit she has submitted to De Lima where she supposedly provided a longer list of lawmakers she has dealt with.

“So there’s nothing for the special panel to consider,” Rafanan said, adding it was up to the justice department or the National Bureau of Investigation to submit the new list.

Tuason’s lawyer, Manalo, declined to comment on the grant of immunity to his client, citing a “gag order.”

“Part of the agreement is not to speak to the media about details of the immunity,” Manalo said in a telephone interview.

He also did not answer questions about Tuason’s selling her house in Dasmariñas Village, the reason why she was allowed to travel to the United States despite her being under government protection as a witness.

A source told the Inquirer that Tuason was leaving again for the United States immediately after the announcement of the grant of immunity to her.—With a report from Gil C. Cabacungan