Arroyo rushed to St. Luke’s hospital due to bladder problems 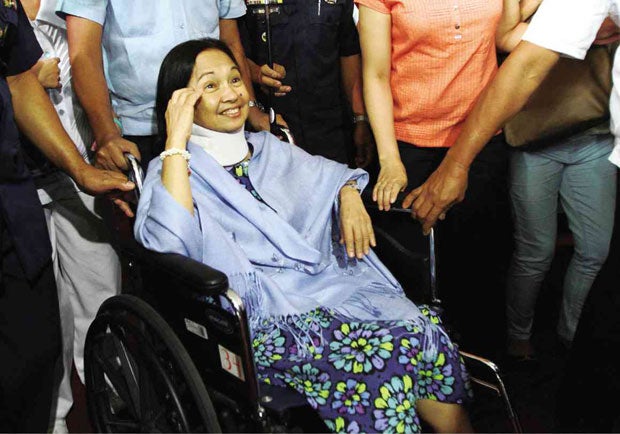 THE CHEERFUL PATIENT Former President Gloria Macapagal-Arroyo greets well-wishers as she is wheeled into St. Luke’s Hospital in Quezon City where she underwent a series of tests for urinary problems on Friday. EDWIN BACASMAS

The former president and now Pampanga congresswoman had complained of frequent and difficult urination. Her lawyer added that at times, traces of blood were seen in Arroyo’s urine.

Urodynamic testing is an examination of the function of the bladder and urethra, particularly in storing and releasing urine.

Arroyo, wearing a blue floral print dress, arrived at the hospital shortly before 2 p.m. aboard a white coaster. Accompanied by her husband, Jose Miguel, and son Dato, she was helped on to a wheelchair and was wheeled in through the front entrance of the hospital, smiling and waving at onlookers.

The former president, who also suffers from a spinal condition, wore a neck brace.

She was escorted by the Police Security and Protection Group and the Quezon City Police District from the Veterans Memorial Medical Center (VMMC), where she has been under hospital arrest for the past years.

Ticman said the former president sometimes had difficulty sleeping due to her health complaints, although she is already taking medication.

He said her condition was still being monitored although “it is not that serious, according to the doctor.”

She was given additional medication for her health complaint and advised on special exercises that could help, Ticman added.

Asked why the procedure was not conducted at the VMMC, the lawyer said the VMMC has the facilities but these were acquired only recently and were not yet fully operational.

“The accuracy of the results might be suspect if the procedure were done there,” Ticman pointed out.

Arroyo, who is facing plunder charges, was allowed by the Sandiganbayan to undergo the outpatient diagnostic test at the SLMC on Friday.

The Arroyos and their escorts left an hour later after the procedure was completed.