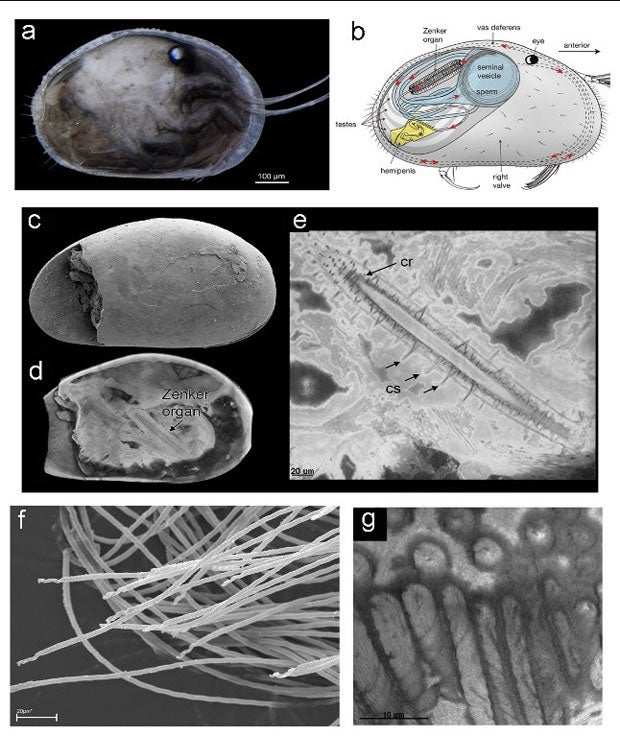 This undated handout photo combo received from on May 14, 2014 shows details of the world’s oldest and best-preserved sperm, dating back 17 million years: a. Specimen of the modern Australian ostracod Newnhamia fenestrata with the right valve removed. b. Sketch of a male ostracod, showing the organization and orientation of the reproductive system. c. Scanning electron microscopic image of Riversleigh fossil ostracod seen from the left side, with left valve partly missing.d. Virtual reconstruction of fossil showing one of two Zenker organs. e. Details of fossil Zenker organ, e.g. chitinous rings (cr) around the central tube and chitinous spines. f. Spiralled giant sperm in modern Australian ostracod. g. Spiralling of giant sperm in fossil ostracod. The sperm from an ancient species of tiny shrimp was discovered at the Riversleigh World Heritage Fossil Site, an area in the far north of the state of Queensland where many extraordinary prehistoric Australian animals have previously been found. AFP/a, c-g: R. Matzke-Karasz; b: R. Smith/UNSW AUSTRALIA

The sperm from an ancient species of tiny shrimp was discovered at the Riversleigh World Heritage Fossil Site, an area in the far north of the state of Queensland where many extraordinary prehistoric Australian animals have previously been found.

They include giant, toothed platypuses and flesh-eating kangaroos.

Mike Archer, from the University of New South Wales School of Biological, Earth and Environmental Sciences, who has been excavating at Riversleigh for 35 years, said the sperm was an exciting find.

“These are the oldest fossilized sperm ever found in the geological record,” he said.

The sperm are thought to have been longer than the male’s entire body, but were tightly coiled up inside the sexual organs of the fossilised freshwater crustaceans, known as ostracods.

“We have become used to delightfully unexpected surprises in what turns up there,” he added of Riversleigh.

“But the discovery of fossil sperm, complete with sperm nuclei, was totally unexpected. It now makes us wonder what other types of extraordinary preservation await discovery in these deposits.”

A research team led by Archer collected the fossils in 1988 and sent them to John Neil, a specialist ostracod researcher at La Trobe University in Melbourne, who realized they contained fossilized soft tissues.

He drew this to the attention of several European specialists, including Renate Matzke-Karasz from the Ludwig Maximilian University in Munich and Paul Tafforeau from the European Synchrotron Radiation Facility in Grenoble, France.

A microscopic study revealed the fossils contained the preserved internal organs of the ostracods, including their sexual organs.

Within these were the almost perfectly preserved giant sperm cells, and within them, the nuclei that once contained the animals’ chromosomes and DNA.

The researchers, whose findings are published in the journal Proceedings of the Royal Society B, estimate the sperm are about 1.3 millimetres long, slightly longer than the shrimp.

Archer said that about 17 million years ago the site where the fossils were found was a cave in the middle of a vast, biologically diverse rainforest.

“Tiny ostracods thrived in a pool of water in the cave that was continually enriched by the droppings of thousands of bats,” he said.

His UNSW colleague Suzanne Hand, a specialist in extinct bats and their ecological role in Riversleigh’s ancient environments, said the steady rain of droppings would have led to high levels of phosphorous in the water.

This could have aided mineralization of the soft tissues.

“This amazing discovery at Riversleigh is echoed by a few examples of soft-tissue preservation in fossil bat-rich deposits in France,” she said.

“So the key to eternal preservation of soft tissues may indeed be some magic ingredient in bat droppings.”