Cleric slams cost of putting Obama up in luxury hotel 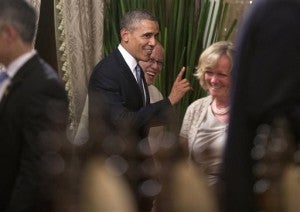 MANILA—An official of the social arm of the Catholic Bishops Conference of the Philippines said Wednesday it was insensitive of the government to spend P300,000 for US President Barack Obama’s overnight hotel stay when many Filipinos were still homeless in the wake of the destruction left by Supertyphoon Yolanda in Eastern Visayas.

In an interview with reporters,, Fr. Edu Gariguez, executive secretary of the CBCP’s National Secretariat for Social Action(NASSA), said the money spent for the lavish hotel room could have built at least six houses for the victims of Yolanda.

The NASSA and Caritas Manila have an ongoing housing program for the typhoon victims in Samar and Leyte. The program has allotted roughly P50,000 for each house to be built.

“We should not be extravagant because we are a poor country to spend that much, especially when many of our countrymen are still coping (with the effects of the) the deadly typhoon. This goes to show the priority of the government,” said Gariguez.

He also urged the government to be transparent in its expenses during Obama’s state visit. “It was taxpayers’ money that was used during his visit so the ordinary Filipinos should know how much the government spent for that,” he said.

Gariguez said that while it was a common Filipino trait to repay “utang na loob,” there were many simple ways to welcome Obama, who visited the country on Monday on the last leg of his weeklong swing through Asia which included visits to Japan, South Korea and Malaysia.

The priest said instead of billeting Obama at a very expensive hotel, the government should have let him stay in Malacañang.

“The government should show some sensitivity to Filipinos still reeling from calamities. It’s not okay to spend lavishly on these things just to get praises from our guests while many of its people are in need,” said Gariguez.

He also pointed out that the government spent lavishly on the state visit but did not gain so much from it.

“The US President did not give his categorical support on the China issue. He was playing safe in his statements so like what former Senator  Joker Arroyo said, we did not gain anything from it,” said Gariguez.

Who’s who at Aquino’s state dinner for Obama