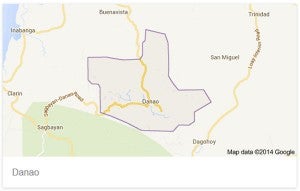 CEBU CITY, Philippines—The officer-in-charge of the Danao Police Station in Bohol was shot dead on Tuesday night by two men on board a motorcycle in Barangay Sta. Fe, Danao town.

Police Officer 3 Elmar Batuan, Danao police desk officer, told the Philippine Daily Inquirer in a phone interview that they were still determining the motive in the killing of their chief, Senior Police Officer 1 Noel Romagos, as of Wednesday.

Romagos was appointed as acting Danao police chief only four months ago.

Initial investigation showed that Romagos, 47, and his wife Evelyn went to their cousin’s house in Barangay Sta. Fe at 7:23 p.m. for an errand. The couple were from the adjacent barangay (village) of Cantubod.

But only Evelyn went inside the house while the police chief decided to stay outside.

Two men on board a motorcycle then arrived.

One of the two men then told Romagos: “Sir puede ba’ng mangutana (Sir, can I ask a question)?”

Before Romagos could reply, he was shot. When the police officer fell on the ground, the back-rider got off the motorcycle and repeatedly shot him.

Romagos was brought to San Miguel Municipal Hospital where he was pronounced dead.

The police officer suffered eight gunshot wounds – five in the face and three in the body. The police later recovered seven empty shells from the crime scene.