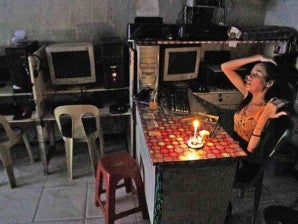 DAVAO CITY, Philippines – The Davao Light and Power Company has announced a four  to six-hour brownouts in the city and other areas covered by its franchise, following failure by the National Power Corp. (Napocor) to meet its supply contract because of the critical condition of the Agus and Pulangi hydropower plants.

Art Milan, DLPC executive vice president and chief operating officer, said that as of Wednesday, April 30, Napocor delivered only 120 MW of the 280 MW it had contracted to supply DLPC, which means a shortfall of 160 MW of its contracted capacity.

“The supply they allocate varies each day,” said Rodger Velasco, DLPC vice president for engineering. He said Napocor was still able to supply DLPC with 180 MW, or 100 MW short of its supply contract the previous week but the problem seemed to have worsened because of some problems in the Pulangi and Agus hydropower plants.

As a result of the shortfall, the power distribution firm servicing Davao City, Panabo City and the nearby towns of Carmen, Dujali and Sto Tomas in Davao del Norte, will implement a maximum of four-hour rotational brownouts during the 9 a.m. to 9 p.m. peak hours, and an additional two hours during the 9 p.m. to 9 a.m. off peak hours.

Velasco said the lack of rainfall and the hot summer months have reduced the generating capacity of Pulangi IV and brought about the severe reduction of the water level in Lake Lanao.

“This morning, there was only 10 MW of power available in Pulangi, out of its 265 MW generating capacity,” Velasco said.

He said Lake Lanao’s water level has already reached 699.5 meters, which is very close to the critical level of 699.15.

“Only a .35-meter difference, or around one foot, and Lake Lanao already reaches critical level,” Velasco said.

DLPC is getting only 15 MW of the 30 MW of power it had contracted with the Aboitiz-owned independent power supplier Therma Marines Inc., because of the maintenance shutdown of one of TMI’s unit.

Of a total 53 MW of power it contracted with another Aboitiz-owned plant, Hedcor, only 38 MW is available, Milan said.

“Over the years, the coming in of more investments, without additional new generating capacity, has put a strain on our existing power supply,” he said.

“The demand went up to 330 MW yesterday (April 29) because it was too hot,” Milan said, “The weather is also a factor in the increase of demand.”

The Mindanao Development Authority (Minda) reported a deficit of 314 MW in the Mindanao grid, owing to reduced output of Agus and Pulangi resulting from low elevation of the water levels which occurs especially during summer.

The shortage is also compounded by the unavailability of 200 MW from the  Steag coal-fired power plant which is still under repair following system breakdown on February 27.

“For now, load curtailment is implemented across all electric coops and distribution utilities resulting to rotating brownouts ranging 2-4 and 4-6 hours at varying extent in several areas,” Minda said in a statement.

Some electric cooperatives have been using their modular gensets, while others deploy embedded bunker diesel.